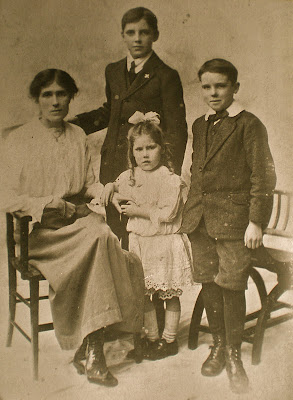 This first picture shows my grandmother along with my father, and his brother and sister. My father is the younger boy and was born in 1908. 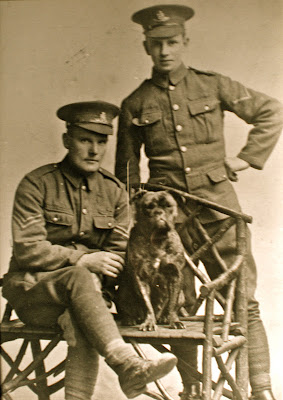 My grandfather is absent from the family group because he was away serving in the Great War 1914 - 1918. He stayed in the army  until 1920. This photo shows him seated with a little dog, probably abandoned due to war, which became his companion whilst he was away. My grandfather was a Bombardier in the Royal Field Artillery and his companion a Lance-Bombardier. 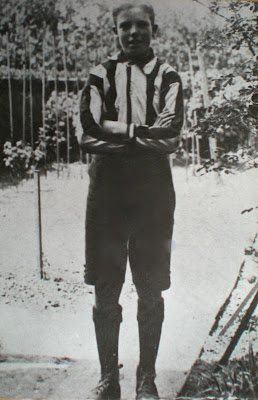 This is a picture of my father as a teenager. He was a really keen sportsman playing both football and rugby. Sadly neither of his sons were keen ball players, and nor are my two sons. He does, however, have a grandson in Canada who is keen on ball sports. 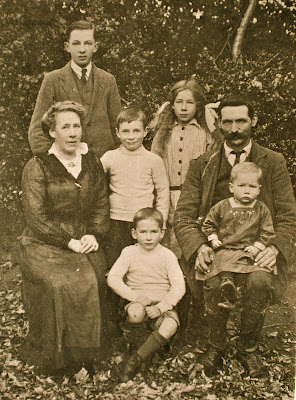 This is a photo of H's grandparents with his father standing in the middle of the picture between his parents.
The interesting thing is that H's father was also born in 1908, and I suspect that in both photos my father and his father are roughly the same age.
My family are from a large town, and H's family are farmers living in the countryside. This makes for an interesting comparison particularly concerning the clothes they are wearing. My father wears a stiff collar, bow-tie, waistcoat, jacket, and trousers with long dark stocking socks and boots. H's father is casually attired in a crew necked jumper, and I am presuming ¾ stockings and boots similarly to his younger brother. The comparisons with our grandmothers too is noticeable. There is definitely a town versus country thing going on. My aunt is obviously the little darling of the family with her hair in ringlets, topped off by a bow, and wearing an embroidery-anglais dress. H's Aunt looks as if her hair hasn't seen a brush or comb for many a day, and the hair ribbons look to have been tied in by herself - however, I love her look. I think she has the look of the Pre-Raphaelites. 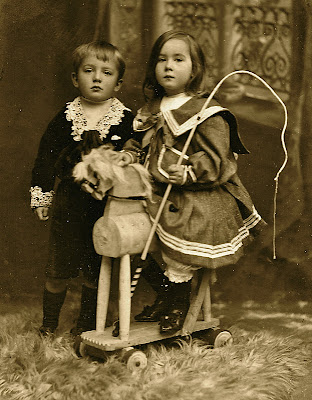 This is a rather poignant photo. The boy is the eldest son shown standing in the family group behind H's father. Sadly as was the way with many families pre modern surgery, immunisation, and antibiotics, his twin sister died from Meningitis shortly after this photo was taken.
Posted by Rosemary at 10:55

Email ThisBlogThis!Share to TwitterShare to FacebookShare to Pinterest
Labels: Family