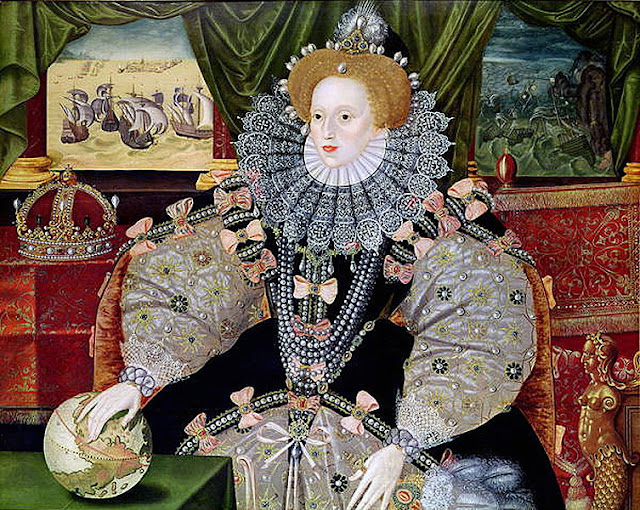 via wikipedia
Elizabeth I of England, The Armada Portrait. This portrait was painted in approximately 1588 to commemorate the defeat of the Spanish Armada which is depicted in the background. The location of the portrait is Woburn Abbey, home of the Duke of Bedford. 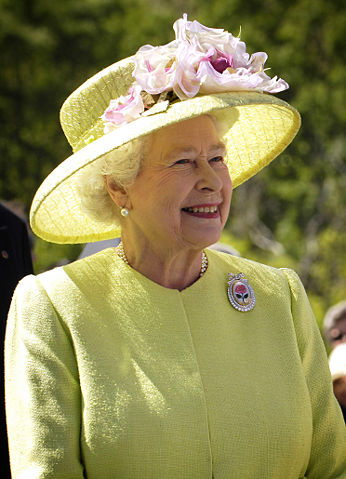 History provides innumerable insights into the English psyche. The declaration of war in 1939 in response to German nationalism amply illustrates doggedness in the pursuit of deep-felt conviction - obstinacy in the face of overwhelming odds. How well Prime-minister Churchill personified the national spirit.
More recently, Britain's decision to exercise its veto at the European Council meeting in Brussels on 9th December, is pertinent to the above characterisation of the nation. By blocking an attempt to bring the Euro-zone crisis within the EU's remit, Britain has inevitably been castigated by mainland Europe as beyond all reason. This should have come as no surprise!
Because of its island status, Britain’s outlook has always been close, but not part of, that of mainland Europe. That twenty-two mile channel, even when spanned by a rail tunnel, has fostered an individuality and separateness of an infinitely greater dimension. This spirit is magnificently exemplified by A.N.Wilson’s recent book “The Elizabethans”. While ostensibly telling the story of the reign of Elizabeth I, the obvious parallels between the events of that time and those of today’s Elizabeth II, in terms of the “Englishness” that underlies these contrasting periods, is readily apparent.
The politics of Elizabeth I was driven by the split of her father – King Henry VIII – with the Church of Rome. At the time, religion in Europe was in turmoil. Nations following the religious reformers Luther and Calvin in the north were in conflict with Roman Catholic southern nations. England was also riven by the split between these two religious streams, but maintained a line between the two that satisfied (for the moment anyway) both sides of the divide. The Church of England, although reformed and separate from Rome, remained catholic in character and thus largely placated the die-hard Papists. At the same time the State’s brutal repression of extreme puritanism enabled a middle course to be steered, so largely avoiding civil disorder. England was under enormous pressure from counter-reformation forces in Europe to revert to Roman Catholicism, the failure of the Spanish armada being a turning point in this.
We see in this period the intellectual adeptness of Elizabeth the First’s reign to turn religious ambiguity into a national asset. Diplomatic relations with Spain were maintained while pretending that the pirating of Spanish treasure ships was not our business. Meanwhile, the perpetrators were showered with wealth and honours on their return home, thus rubbing salt into the wound. England turned from its squabbling neighbours in Europe to building a maritime capability, spreading its tentacles into the undeveloped world, leading eventually to a colonial empire.
Four hundred years on we have a Britain that wishes to be part of Europe, but not bound to it in every sense – the maintenance of the national currency being the principal divide. As we saw in the recent Brussels meeting, Britain was willing to be part of an EU pact to save the Euro-zone providing an exception was made for the City of London to remain outside of any new financial controls.
This should have come as no surprise to other members of the EU. The English believe that the country’s national interest (while remaining part of the EU Single Market) is best served by it not being part of a federal Europe, but free to pursue its international ambitions wherever this should take it.
This is the English character - the way we are – it is our roots. Nothing has changed! This is my personal view point.
A Happy Christmas to readers, wherever you may be - H
Posted by Rosemary at 13:47

Email ThisBlogThis!Share to TwitterShare to FacebookShare to Pinterest
Labels: History