Temple of Artemis and Basilica of St. John 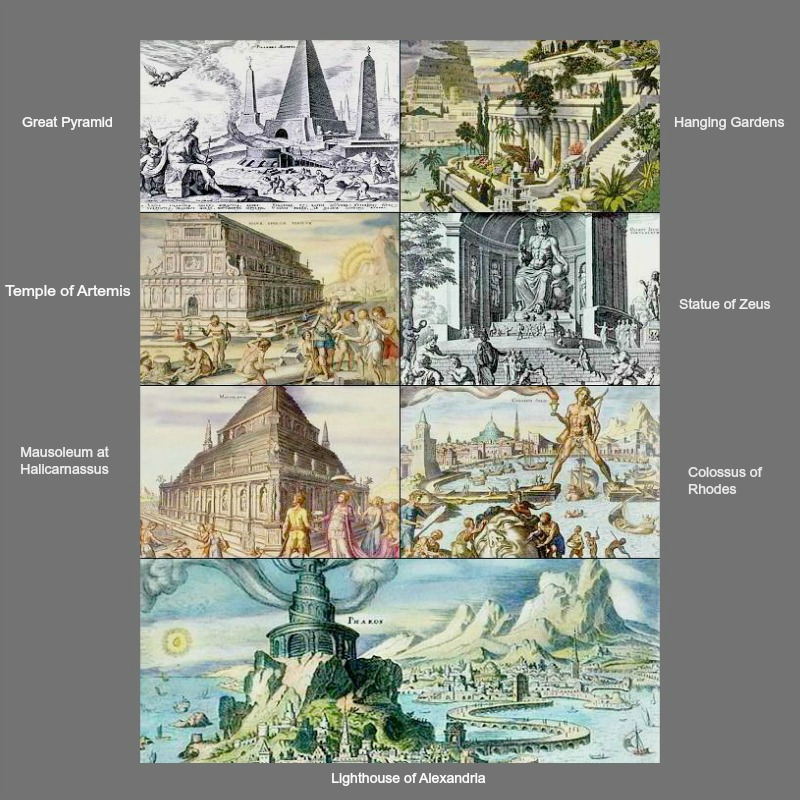 via
The Seven Wonders of the World refers to remarkable constructions dating back to classical antiquity
Only one, the Great Pyramid of Giza, the oldest of the ancient wonders, remains relatively intact
The location and fate of the Hanging Gardens of Babylon is unknown, the Colossus of Rhodes, Lighthouse of Alexandria and Mausoleum at Halicarnassus were destroyed during earthquakes, and the statue of Zeus and Temple of Artemis were deliberately destroyed.

"I have gazed on the walls of impregnable Babylon along which chariots may race, and on Zeus by the banks of the Alphaeus. I have seen the Hanging Gardens and the Colossus of the Helios, the great man-made mountains of the lofty pyramids, and the gigantic tomb of Mausolus; but when I saw the sacred house of Artemis that towers to the clouds, the others were placed in the shade, for the sun himself has never looked upon its equal outside Olympus" - Greek Anthology lX.58

Artemis was one of the most venerated of the Ancient Greek deities, her Roman equivalent being Diana. She was the daughter of Zeus and twin sister of Apollo 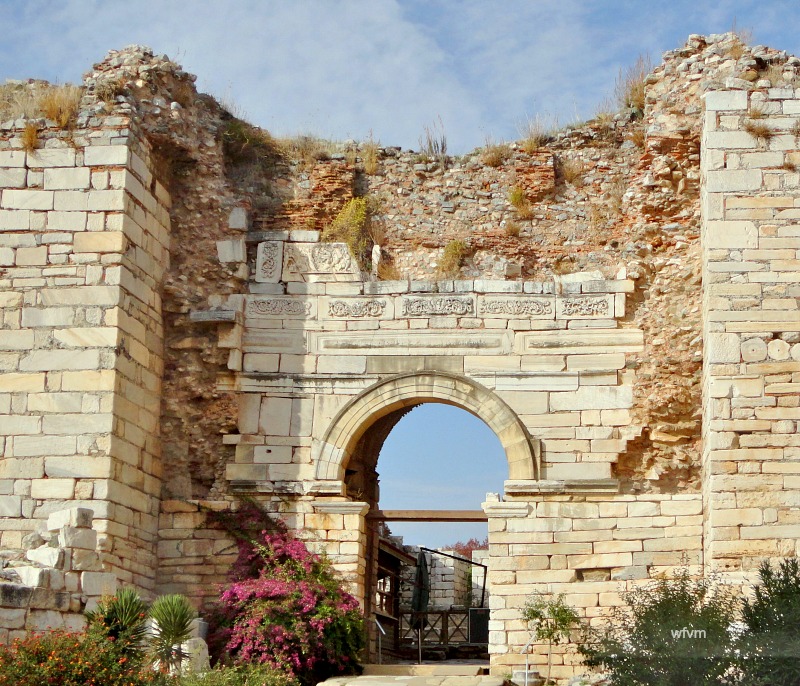 Entrance to the Basilica of St. John
For centuries early Christian tradition held that St. John moved to Ephesus living there before and after his exile to the island of Patmos where he wrote the book of Revelations. Upon his return to Ephesus, he wrote the Gospel of John. He died in Ephesus in or around 100 AD. A tomb, discovered in the 4th century, was thought to be his, and a modest church was built over it. Emperor Justinian and Queen Theodora then built a sumptuous basilica over the church during the 6th century. 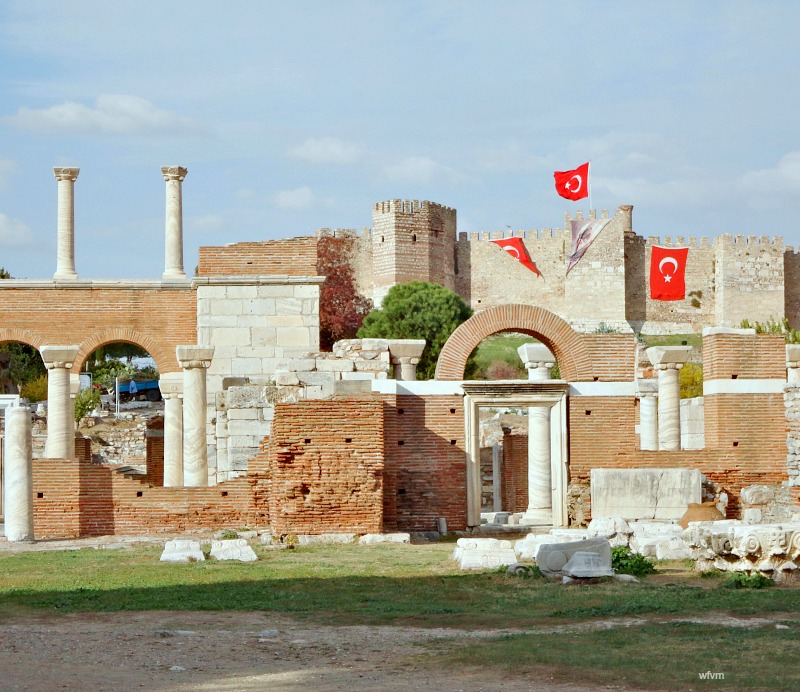 The church attained the status of a "Church of the cross" and played an important Christian pilgrimage role during the middle ages. 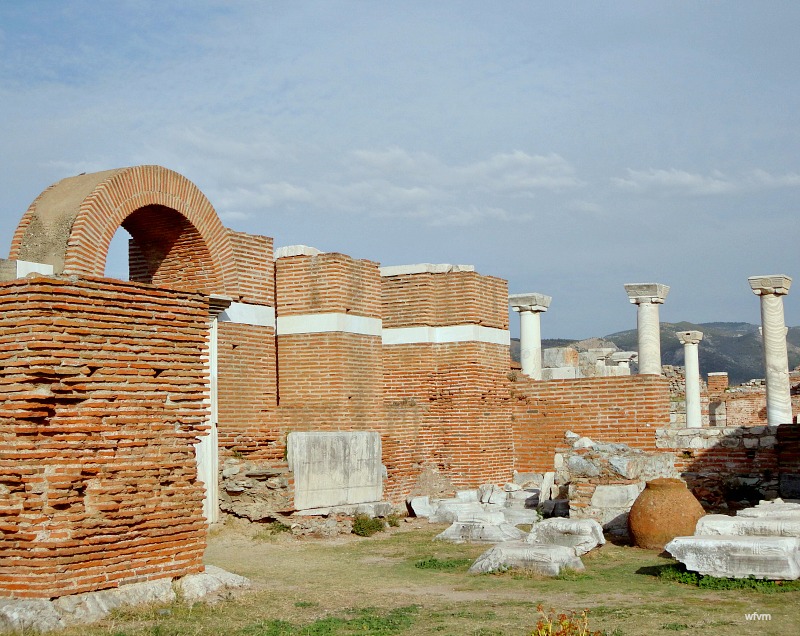 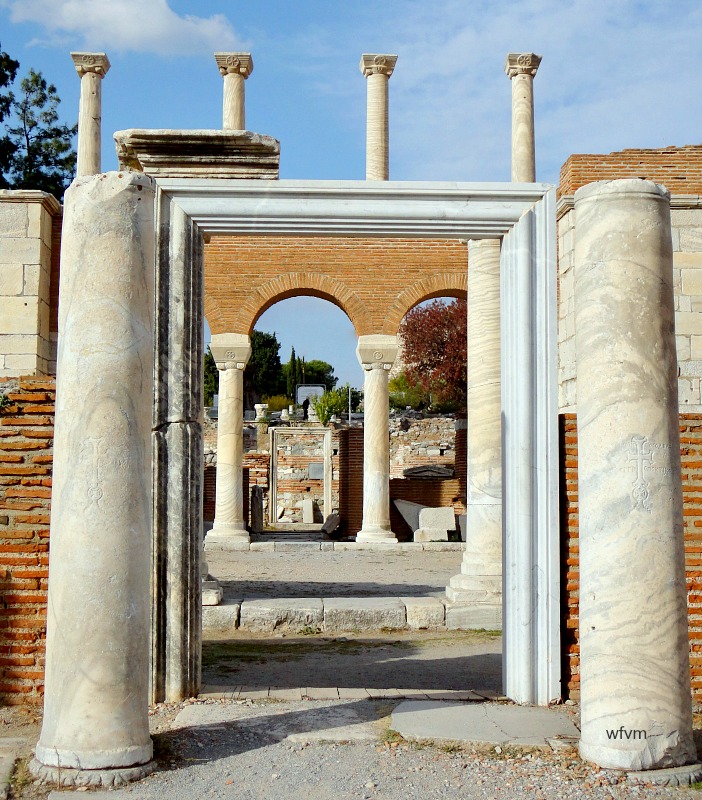 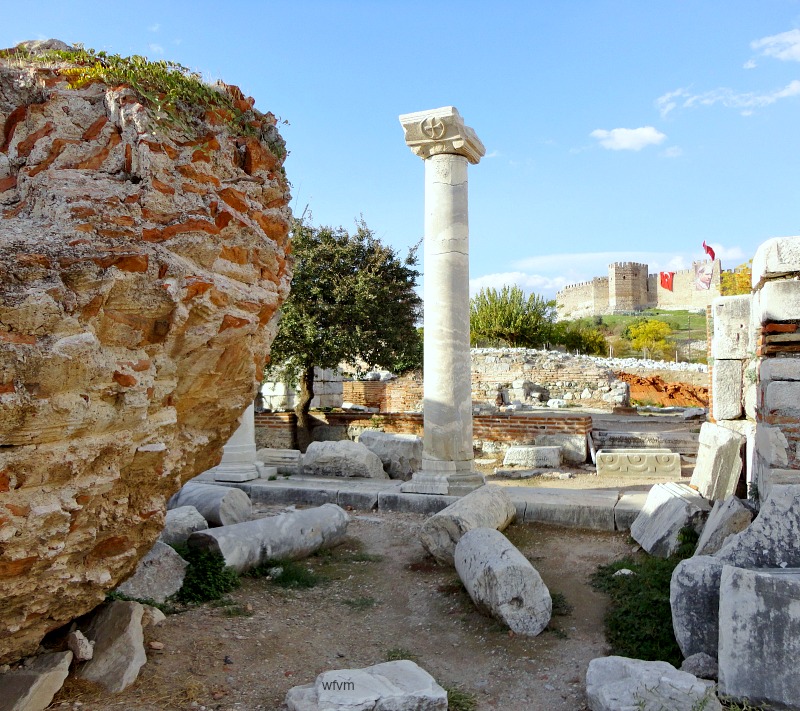 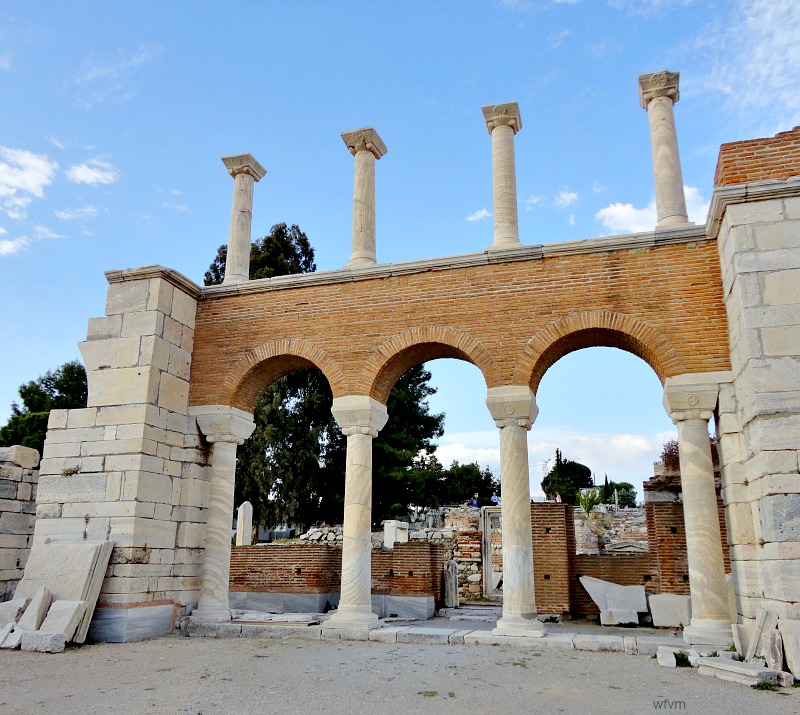 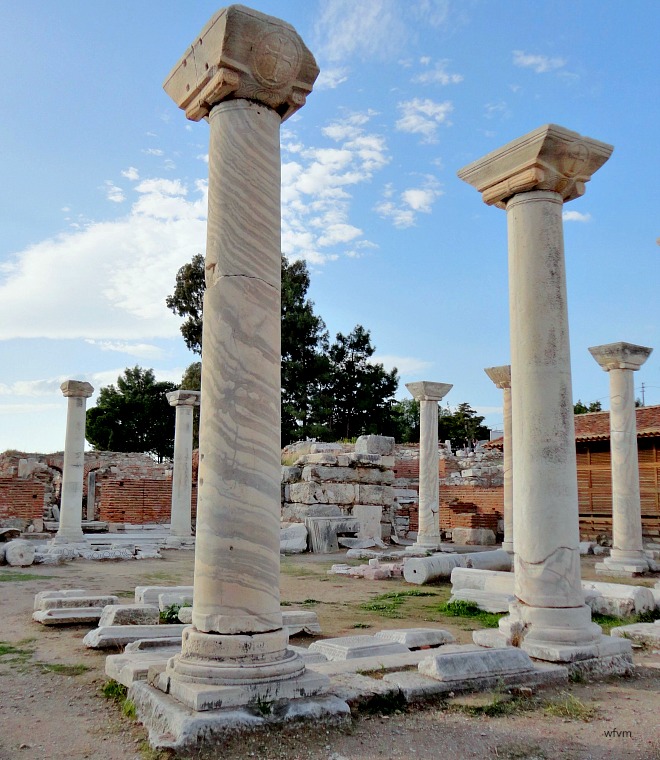 I touched several of these marble pillars in St. Johns in case they had been reused from the temple! 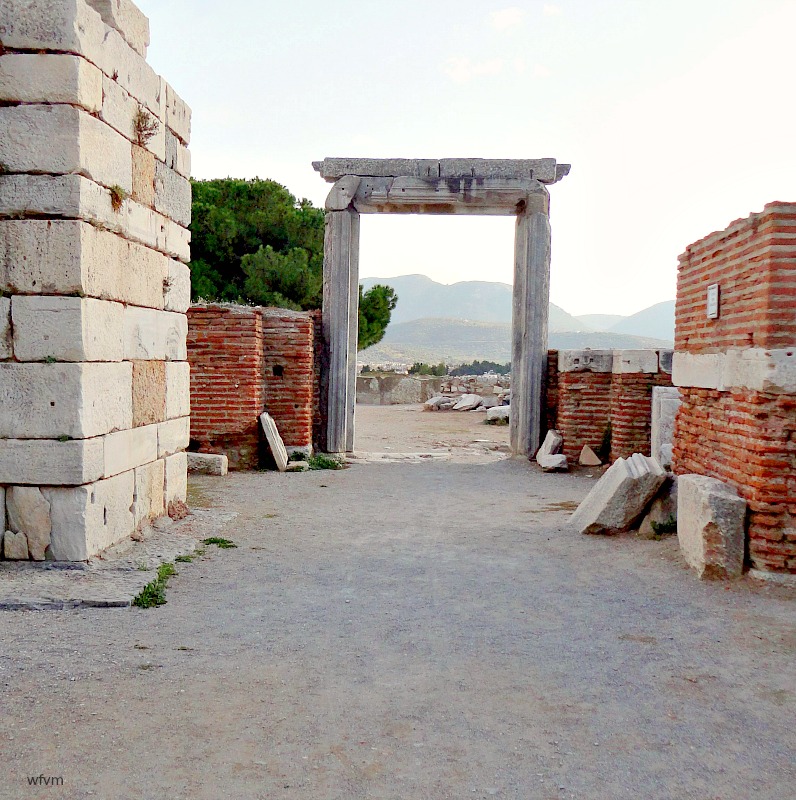 It is generally accepted that St. John came to Ephesus together with the Virgin Mary, and it is where they both spent the final years of their lives. 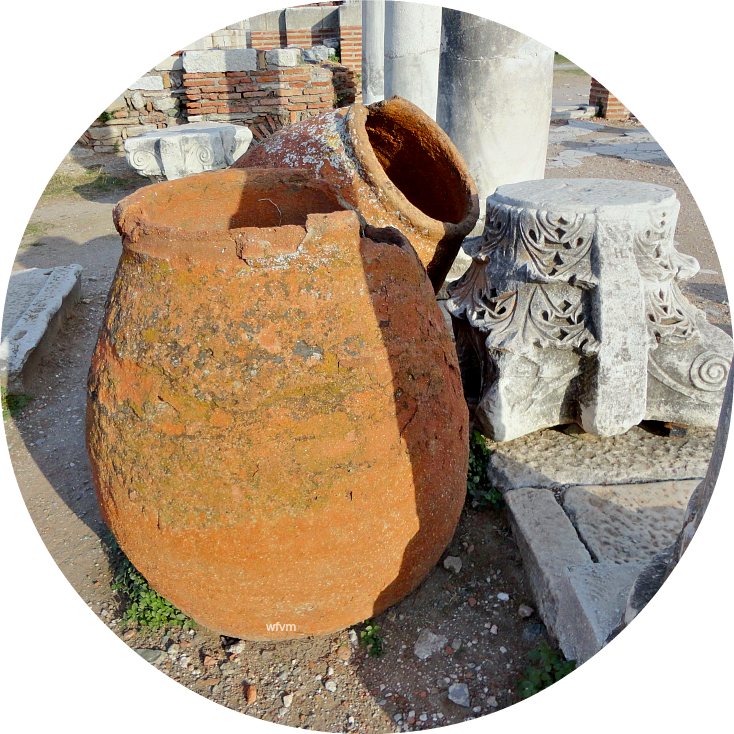 I personally have seen the Great Pyramid of Giza, and the spot where the mighty Lighthouse of Alexandria was plunged into the sea during an earthquake. Looking upon the site of another of the 7 wonders of the ancient world was a moment when I pondered how it might have looked. Built in 550 BC this Hellenistic temple had a marble podium with thirteen steps leading up to a double colonnade which completely encircled the peristyle. It is considered to have been the very first marble building ever to have been constructed. The Temple was 150% larger, 50% longer and 50% wider than the impressive Parthenon in Athens, its Ionic columns were 25% taller - it was massive.
As you can probably imagine the British Museum has a collection of beautiful pieces from the temple courtesy John Turtle Wood's excavations in the 19th century!
Posted by Rosemary at 09:06