Aphrodisias lies in the upper reaches of the Meander Valley, the most fertile area on the Turkish west coast. The marble quarries situated in the region gave rise to a flourishing industry extensively exploited during the Hellenistic and Roman periods. The sculpture school in Aphrodisias became famous in the Roman world, and it is where many fine examples of exquisite statuary have been unearthed. Aphrodisias was named after Aphrodite, the Greek goddess of love, a pagan Temple dedicated to her stood at the heart of the city. 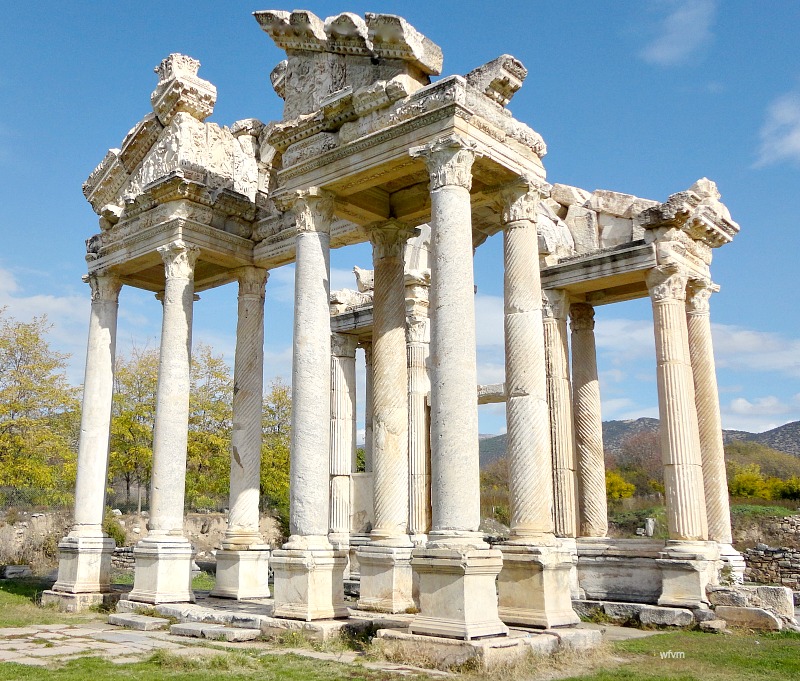 Tetrapylon, the entrance gate to Aphrodisias 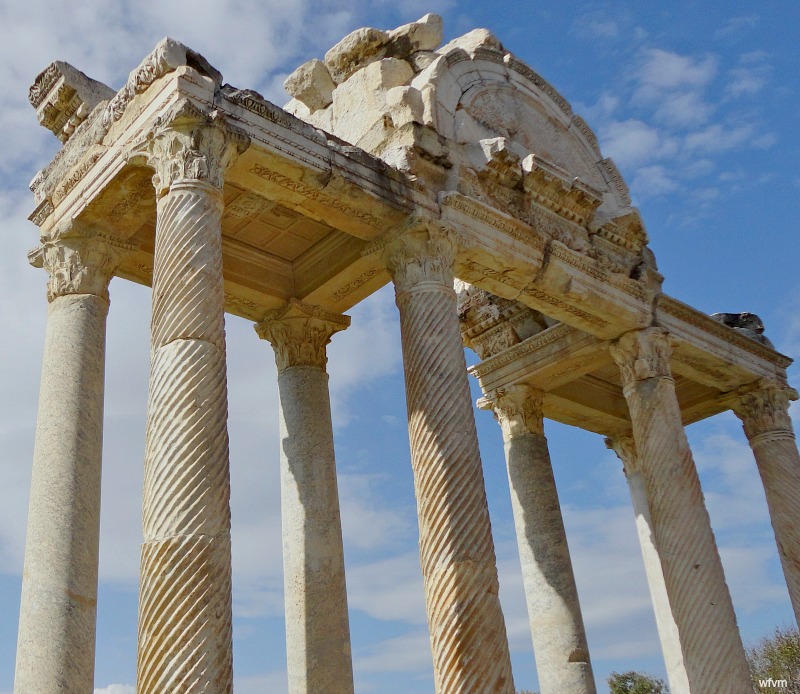 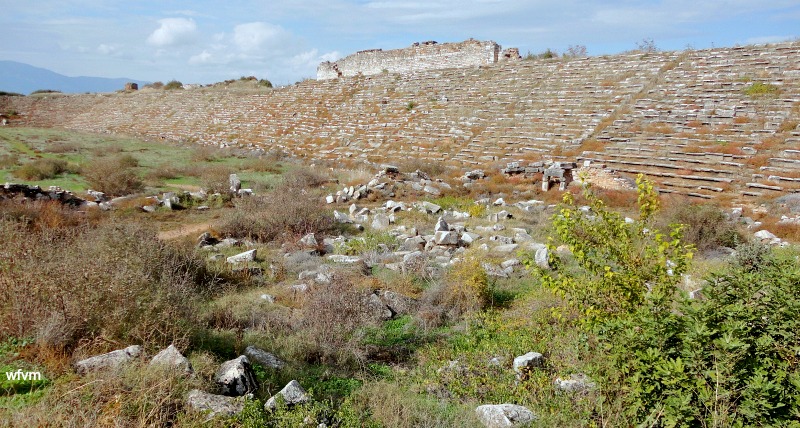 The Stadium at Aphrodisias is 270 meters long and has 30 tiers of seating with space for 30,000 people. It is not only the best preserved ancient stadium in the world but also the largest. Built in the first century AD to house traditional Greek athletic contests such as running, jumping, wrestling, discus, and javelin throwing.
During the Roman period the stadium was used for gladiatorial combats and wild beast fights. Numerous inscriptions carved on the seats of the stadium provide information about the spectators. Some reserve spaces for groups of associations - The Tanners and The Goldsmiths, and others are reserved for specific individuals. Men and women from Aphrodisias and also nearby Antioch would attend the stadium 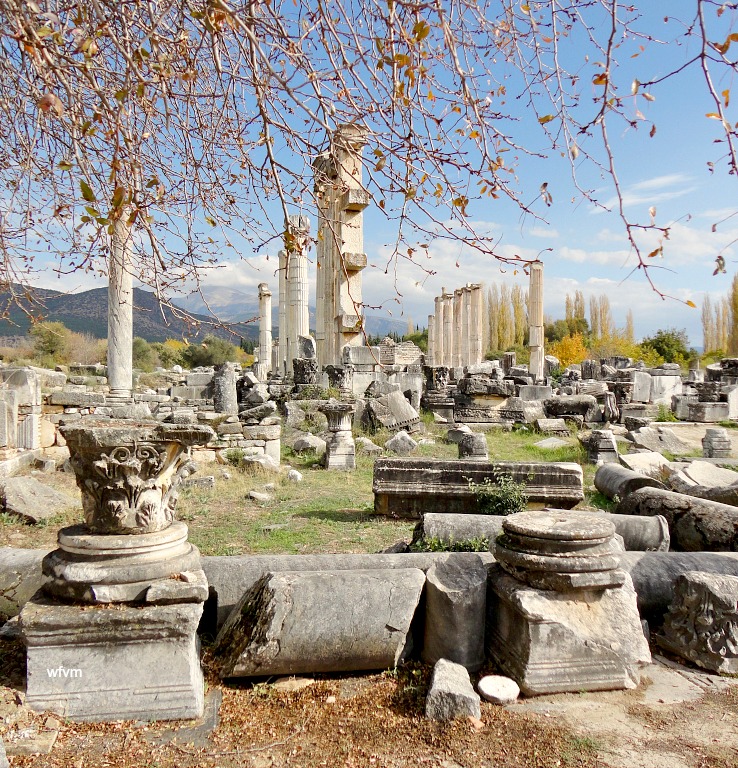 The ionic order of the Temple of Aphrodite was begun in the late first century BC and completed during the reign of Augustus. In the second century AD, the temple was enclosed in an elaborate colonnaded court framed by a two storied columnar façade on the east, and by porticos on the north, west, and south 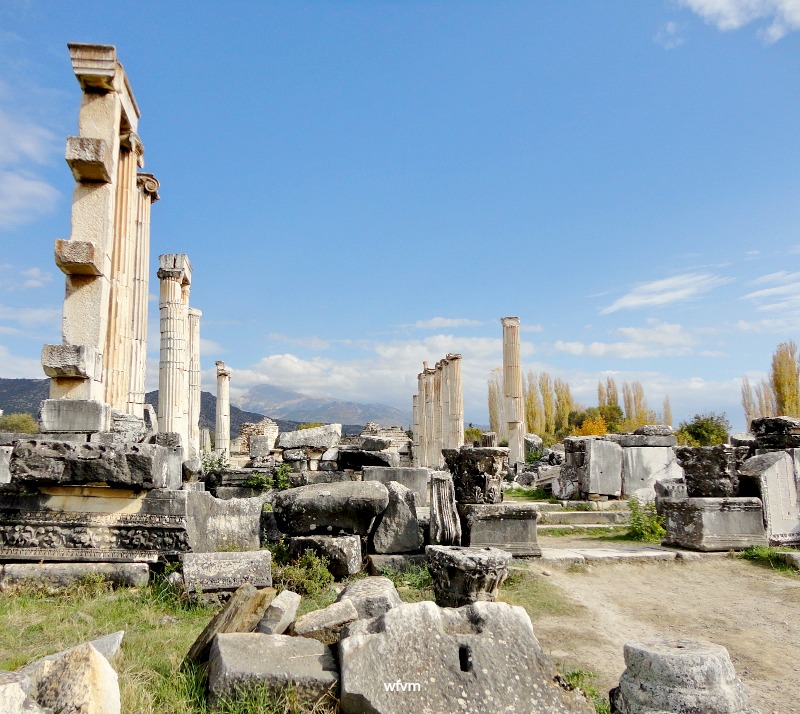 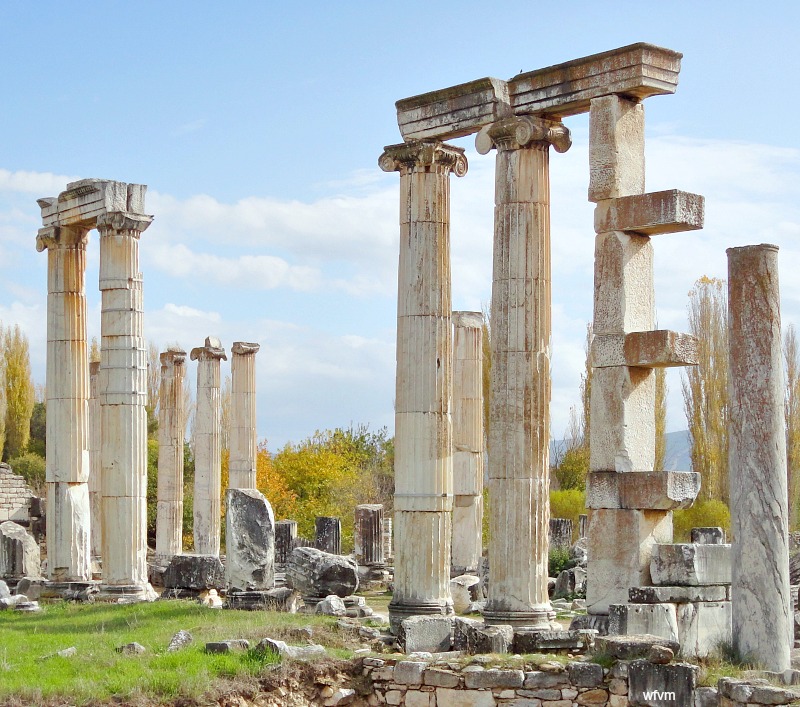 Around 500 AD the temple was converted into a Christian church. The conversion was an enormous undertaking in which many of the columns were removed from their original positions and used to extend the northern and southern colonnades. It changed the proportions of the pagan temple into an enormous church which remained in use until the Seljuk conquest in 1200 AD. 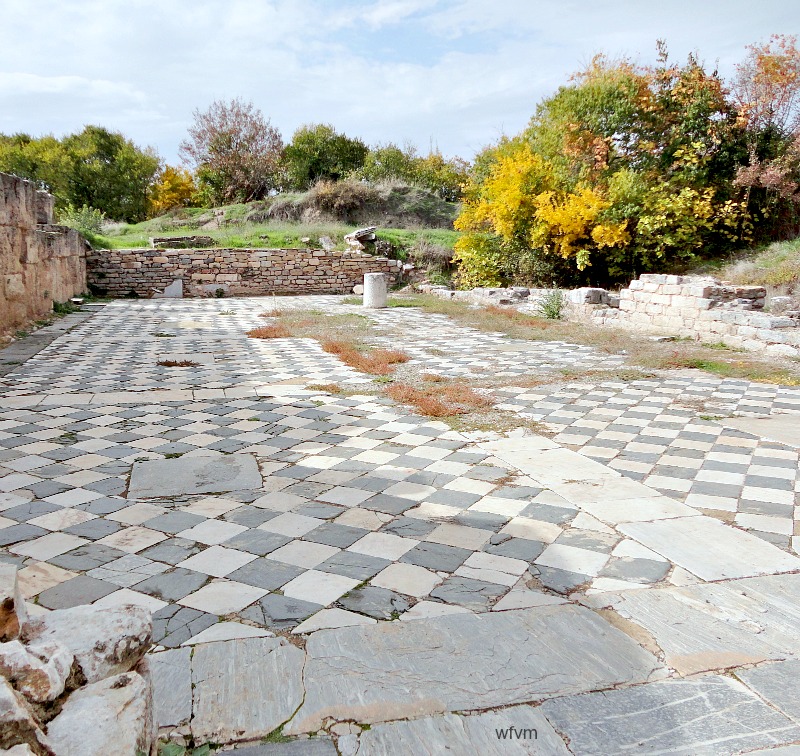 The Bath of Hadrian at Aphrodisias was originally richly decorated with marble ornamentation
The South Agora was a park like public square with Ionic marble colonnades that surrounded an ornamental pool. The double wall of the pool housed pipes that carried water under pressure to feed several fountains. The north portico of the square carried characteristic mythological masks and garland friezes dedicated to emperor Tiberius AD 14-37. The west end was enclosed by the Hadrianic Baths. 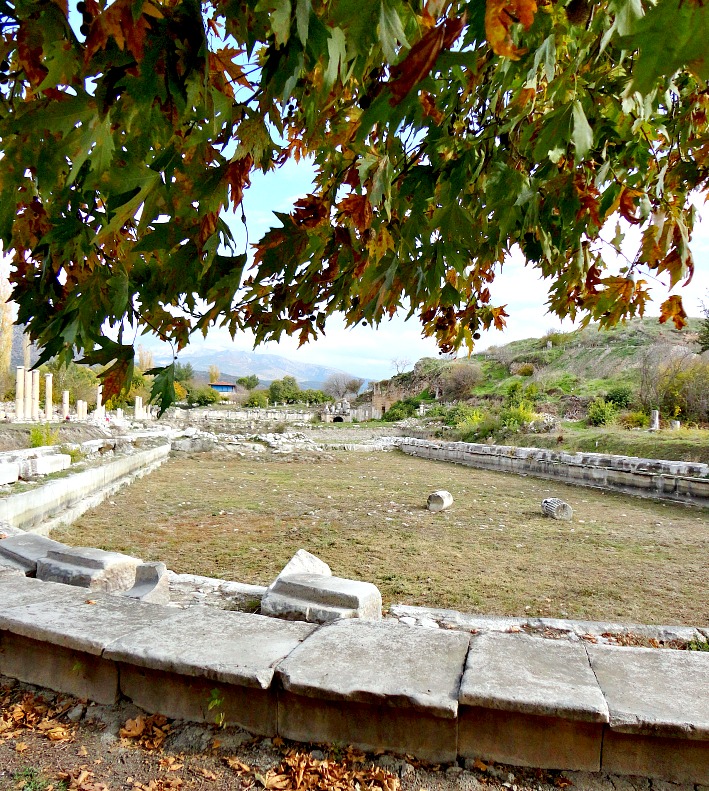 This unique pool and its fountains which measures 170m has recently received funding to excavate the remaining earth fill and research its function and water system with the hope of eventually restoring it. 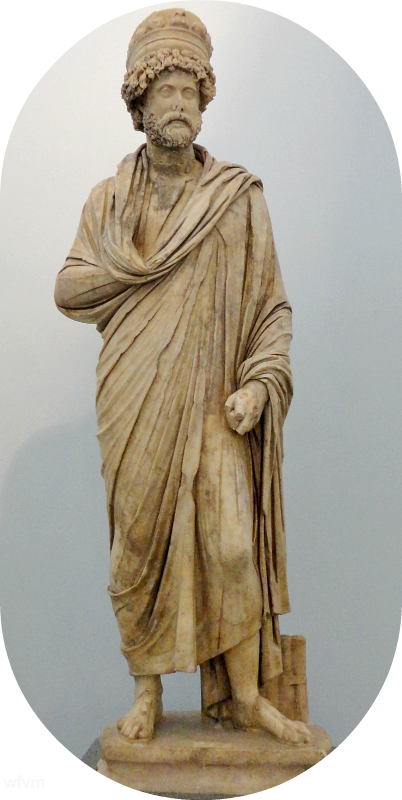 Antonius Claudius Dometeinos - was a local magnate, honoured by the city with a public statue at the entrance to the Bouleuterion. He wears civic dress and a heavy priestly crown, decorated with busts of Aphrodite and Roman emperors

The best preserved version of the cult statue of Aphrodite from her temple. Her head was veiled and she wears a heavy casing on which are (a) Three Graces, (b) Moon and Sun (c) Aphrodite on a sea-goat, and (d) Eros figures sacrificing 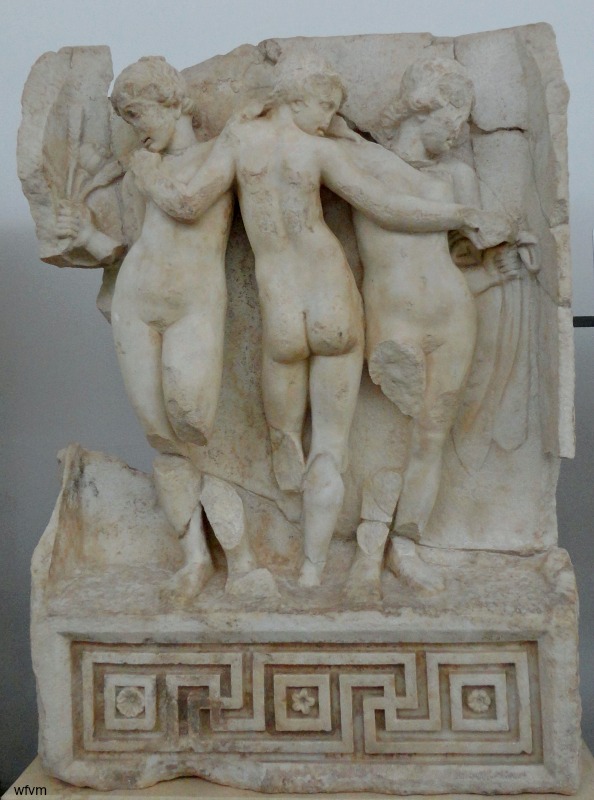 The Three Graces stand in their familiar hellenistic composition. They were handmaids of Aphrodite and appeared in this form on the decoration of her cult statue above. Their names evoke their character: Euphrosynē - Joy, Aglaia - Splendour and Thaleia - Bloom 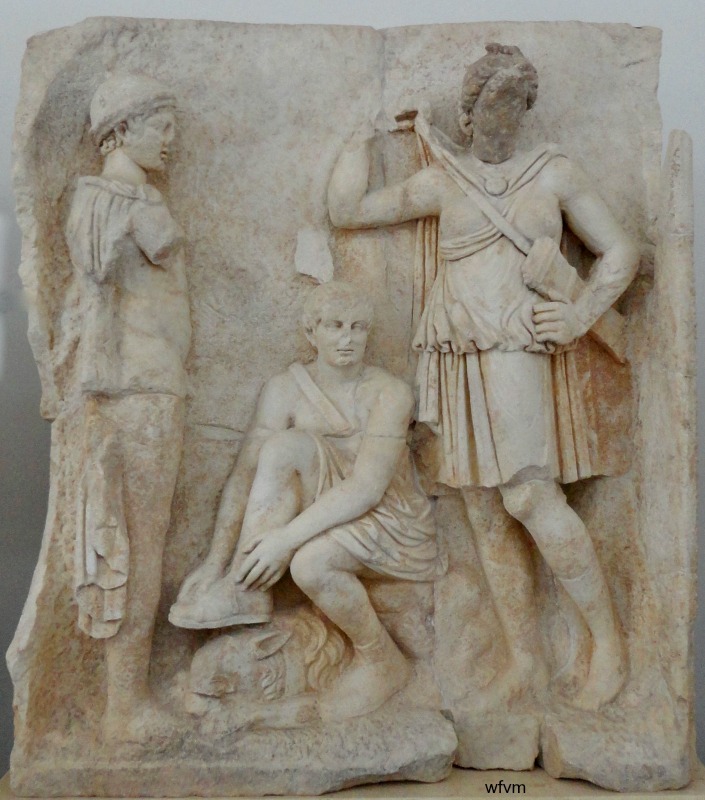 Meleager sits on a rock tying his sandal. Below him lies a fierce hunting dog with a broad collar. On the left side a god or another hero crowning Meleager (arm missing). On the other side stands the huntress Atalante, Meleager's lover: she wears a short dress and quiver, and lifts her cloak at the shoulder in a gesture of modesty and flirtation 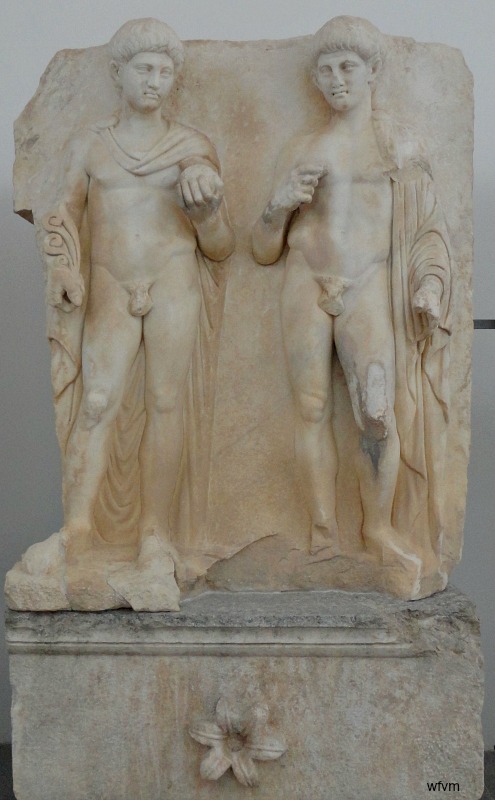 The two princes stand like statues, naked, wearing cloaks. The left figure holds the orb of the world in one hand, a symbol of world rule that indicates he is the imperial heir, and in the other an ornament from a ship's stern, a symbol of naval victory. They are probably Gaius and Lucius, the grandsons of Augustus, or Nero and Britannicus, Claudius' heirs 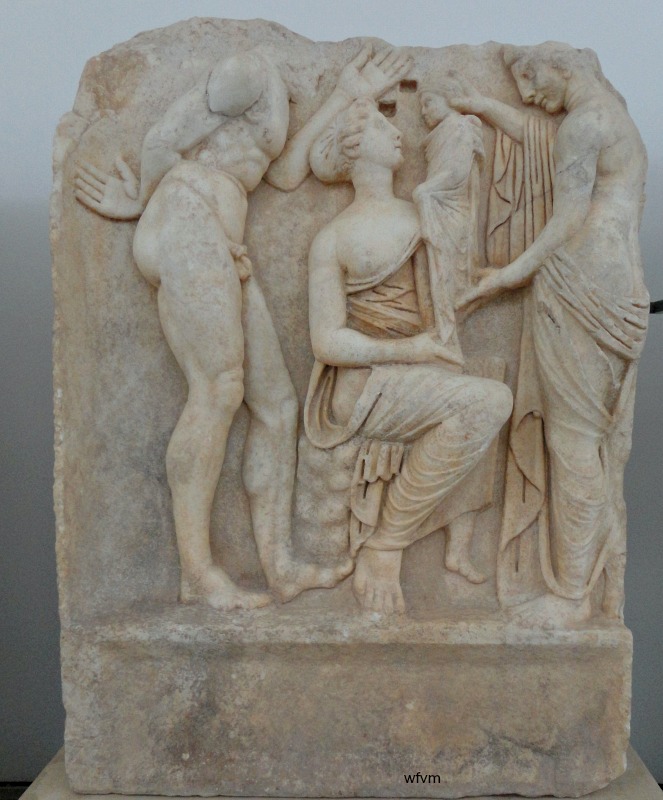 The swaddled baby Dionysos is handed from one nymph to another for suckling. A bearded Slienos gestures excitedly with his arms and taps his foot as though singing or about to dance. The scene is set at nearby Mysa in the Meander valley, where Zeus had his gifted child Dionysos, born to him by Semele, brought up in the wilds out of view of his wife Hera 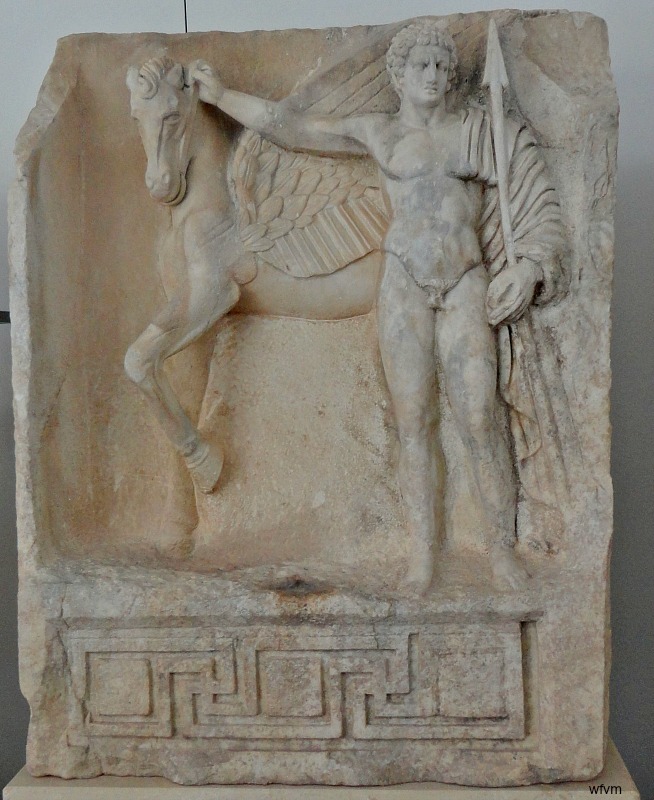 Bellerophon was a Lykian hero, and was claimed as a founder at Aphrodisias. He holds his winged horse Pegasus. The carving is considered poor: the sculptor apparently learning his craft
The on site museum at Aphrodisias is exceptional with several very large rooms filled with wonderful marble statuary found at Aphrodisias - this is just a brief glimpse. The statuary gives an indication of the magnificence that was Aphrodisias. 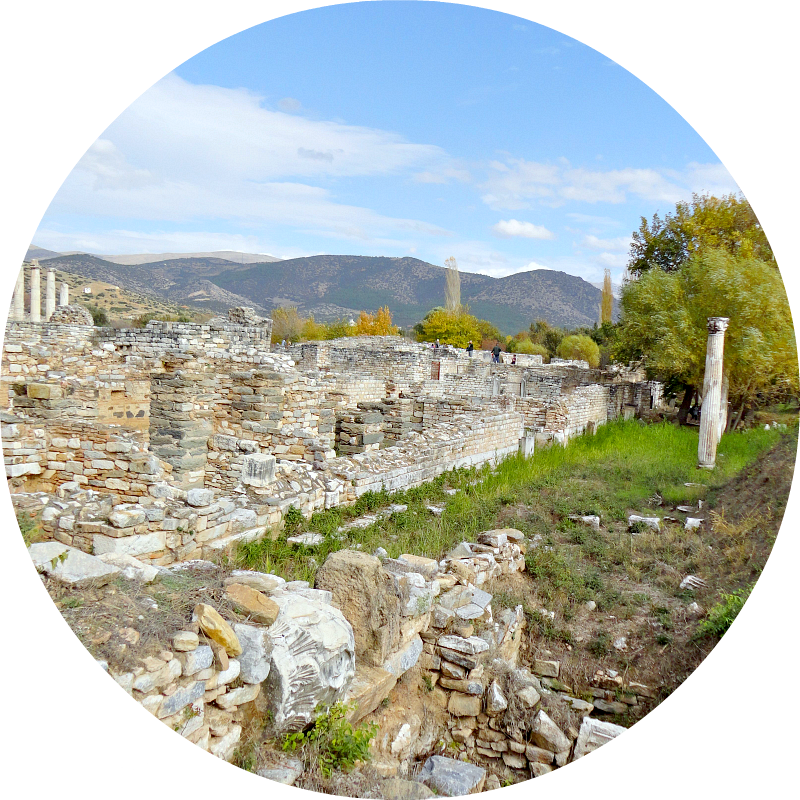 Aphrodisias was a special city beloved by Augustus. Due to this it was exempted from paying taxes - Zoilos a good friend and a former slave of Augustus was from the city - Aphrodisias, was an artisan city whose Sculptors made statues for emperors and commanders from all over the Roman Empire
A letter written by Emperor Augustus to Stephanus - Governor of Laodicea
"Greetings.
You know my affection for my friend Zoilos.
I have freed his native city and recommended it to Antonius.
Since Antonius is absent, take care that. No burden falls upon them.
This one city, I have taken for my own out of all Asia.
I wish this people to be protected as my own townsmen.
I shall be watching to see that you carry out my recommendation to the full."

This is the last post from Turkey 2014, but I am including one final image. This is for Gina at the lovely blog Art and Alfalfa who noticed it in a collage and asked if I would show it in full 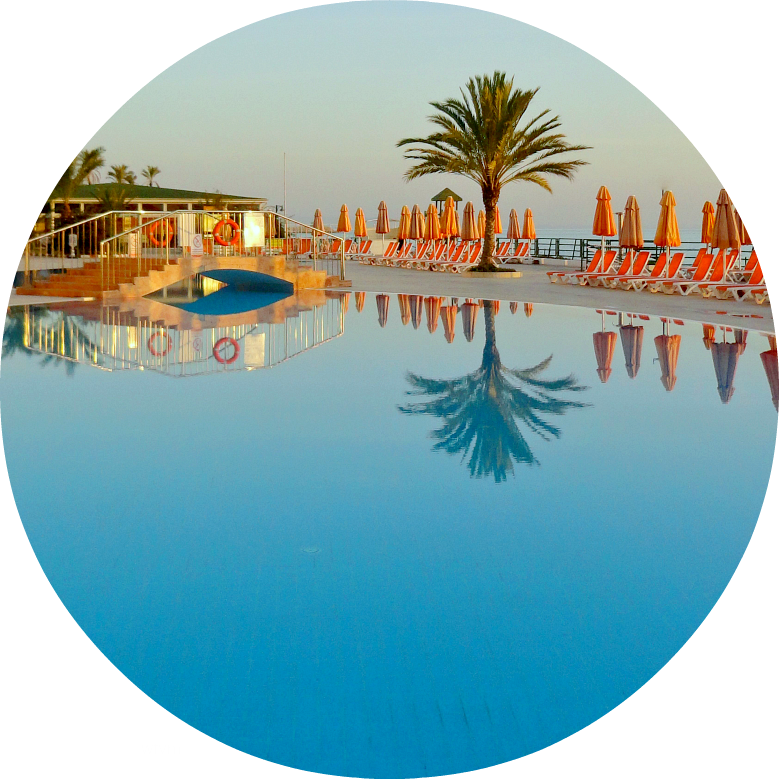 Early morning in Antalya
Posted by Rosemary at 10:04