The Church Across the Valley 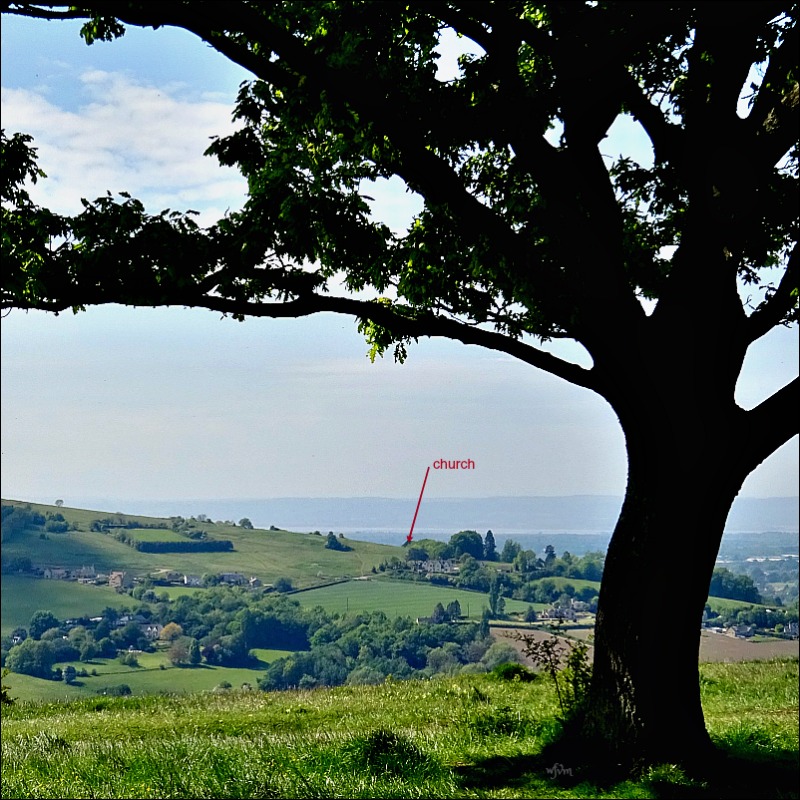 The unique little church of 'All Saints' sits beneath a large area of Common land. We can just see it from our hilltop spot on the far side of one of our valleys. 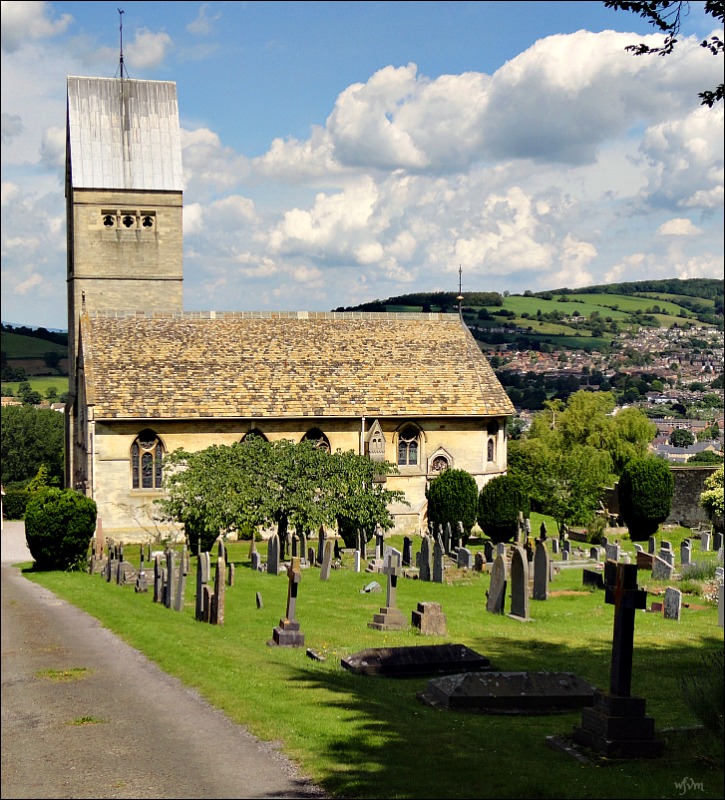 It is not a typical 15th century Cotswold wool church as it was built in 1861. It was designed by the eminent Victorian architect, G.F Bodley for local, wealthy, cloth and mill owner, Sir Samuel Marling, a noted philanthropist. 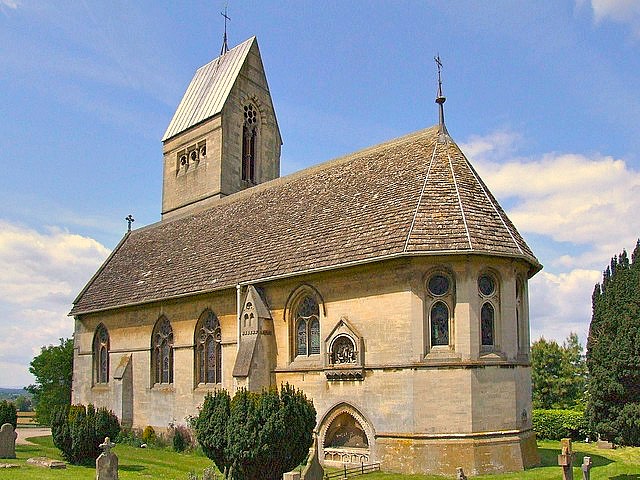 Marling requested that the church design be modelled on a church that he had visited at Marling in the Austrian Tyrol, but it appears that Bodley has designed a fusion of both Austrian and French design. The resulting church, however, sits happily in our Cotswold landscape, but it could sit equally well in the Austrian Tirol or for that matter in France. Its distinctive saddleback tower and French Gothic gables have all been built using local Cotswold stone along with Bathstone dressings. 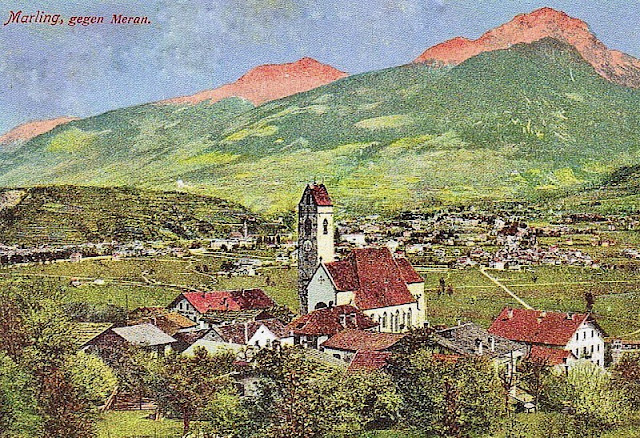 An old postcard of the church at Marling dated 1908
The church became one of the most important early works for G.F Bodley and of great significance in the development of high Victorian architecture.
However, of major importance, is the fact that this was the very first church in this country to exhibit the work of the English Arts and Craft movement, and most important of all, inside are the very first stained glass windows ever to be commissioned from William Morris. 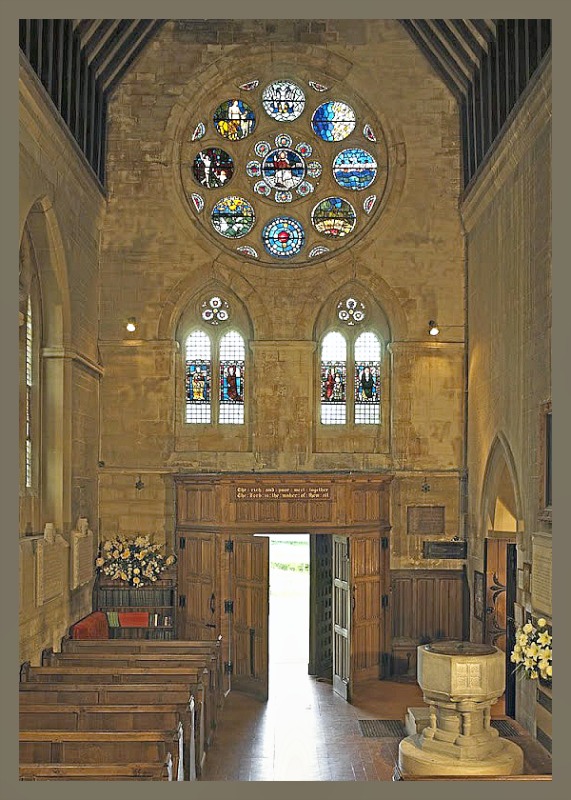 Entrance from the west door. 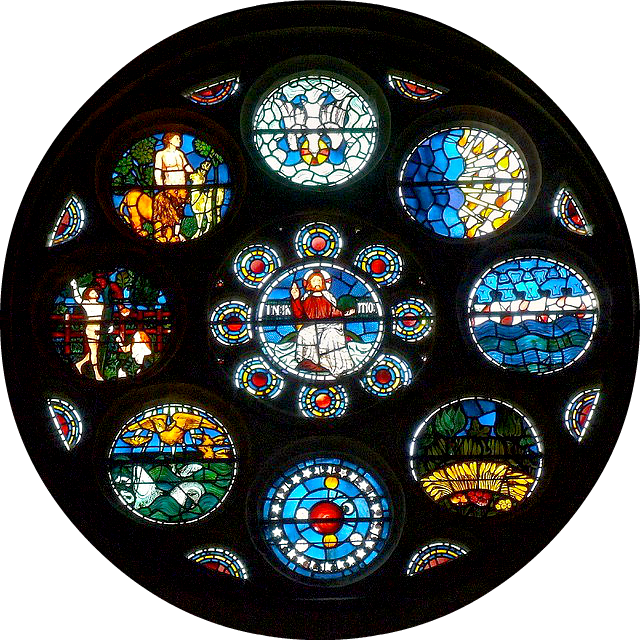 The above Creation window is the work of Philip Webb, but the roundel of Adam and Eve in the garden was the work of William Morris (to the left of the central Christ in Majesty roundel). 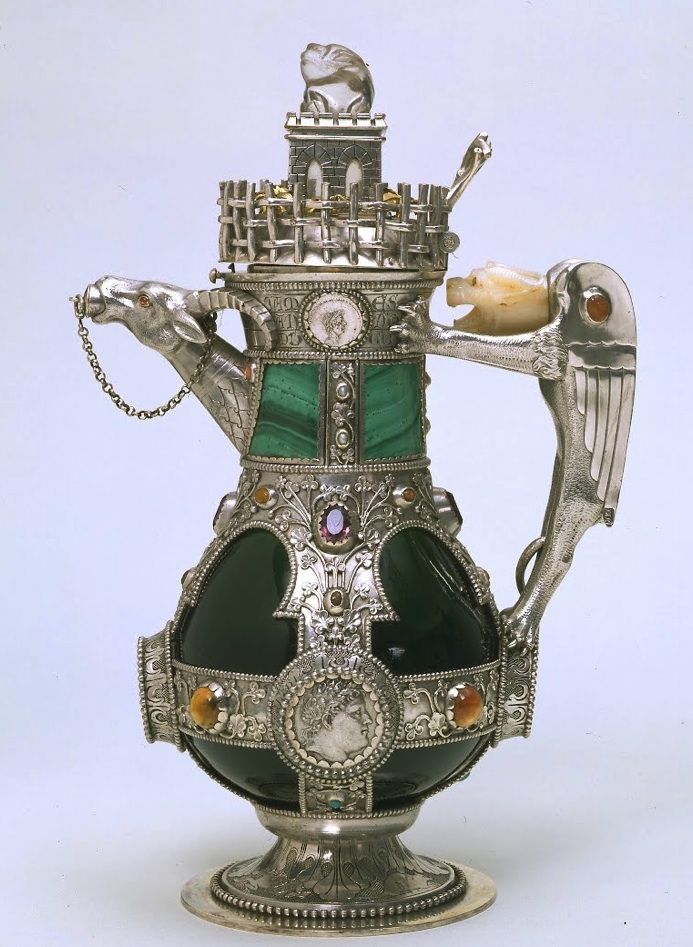 Morris and company were formed in the year that the church building commenced. A partnership between Morris, Burne-Jones, Ford Madox Brown, Dante Gabriel Rossetti and Philip Webb. Their capital was £20 each plus £100 from Morris's mother. The windows in this church are really important because they involved all of the partners. The outcome is an exquisite Pre-Raphaelite gallery of their early work. 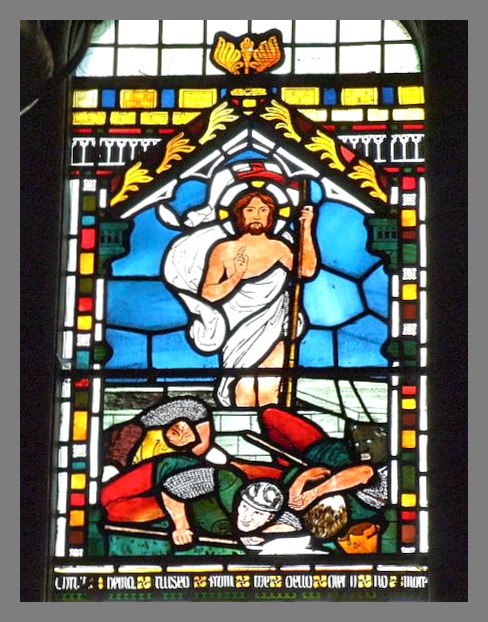 The Resurrection is by Burne-Jones. It echoes Piero della Francesca's fresco, seen many years ago, when I visited the Museo Civico, in Sansepolcro, Italy. 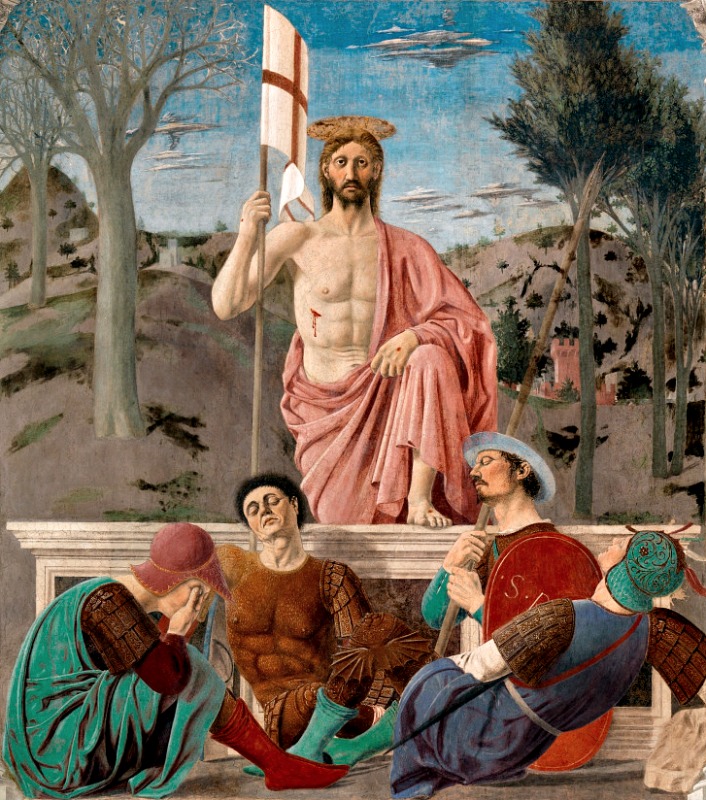 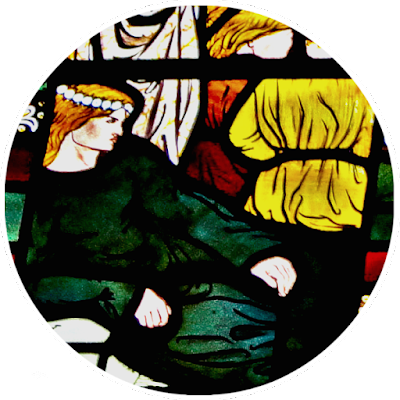 A small detail from a window showing St. Paul preaching in Athens, which is the work of William Morris. The detail shows an image of Jane Morris, who was his wife. 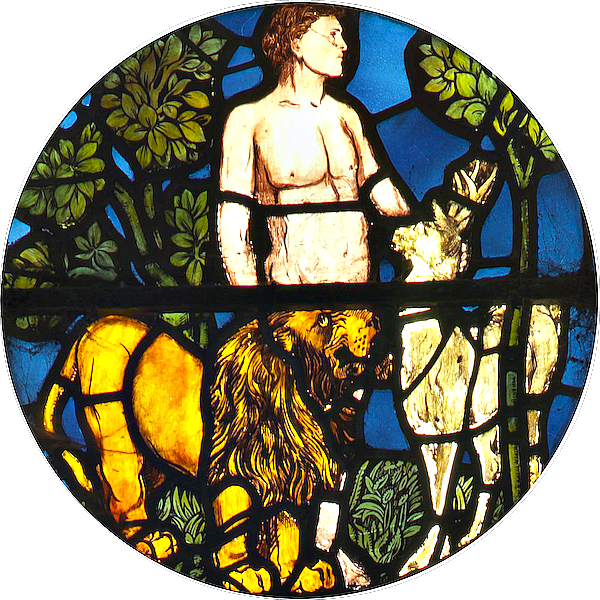 Adam naming the beasts
Two of the roundels from the large Creation window designed by Philip Webb. Philip Webb was the architect who designed the 'Arts and Craft' house known as the Red House for William Morris, in Bexleyheath, Southeast London. 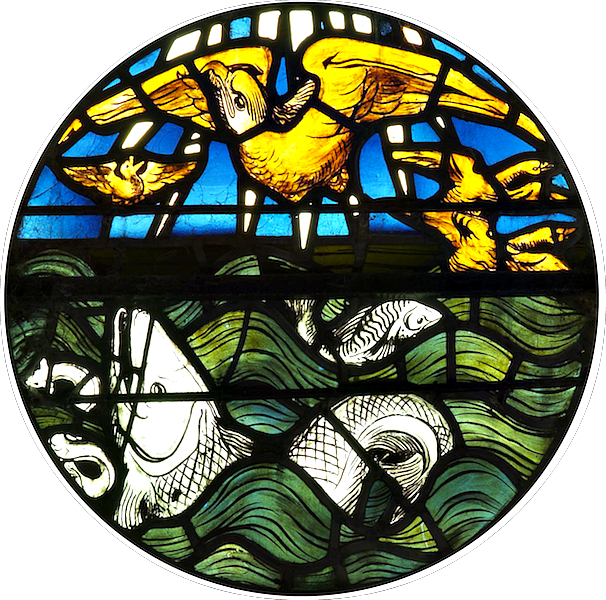 The birds of the air, and the fish of the sea 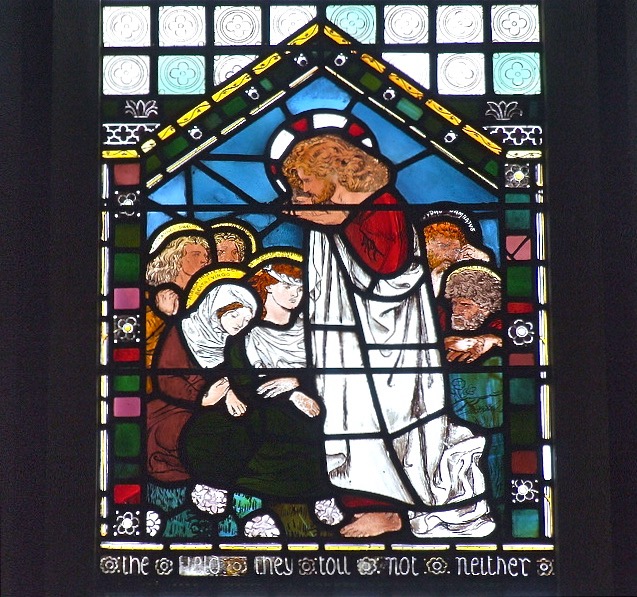 Detail from Sermon on the Mount by Dante Gabriel Rossetti. Christ in this window is George Meredith (novelist and poet). The Virgin Mary is Christina Rossetti (Dante's sister). Mary Magdalene is Fanny Cornforth (one of Rossetti's favourite models). The figure immediately behind Christ is Judas Iscariot and shows a depiction of a man called Gambart. He was a London picture dealer, and very much disliked by all of the Brotherhood.
William Burgess, one of England's greatest Victorian architects and designers, was commissioned to design a collection of silver for the church, which was then made by George Hart of London. One of his most famous architectural buildings was Cardiff Castle. He was inspired by medieval England and Gothic Revival styles, the Arts and Crafts movement, and the Pre-Raphaelites.
When we first moved to the Cotswolds over 20 years ago, Burgess's exquisite silver could still be seen on display during special occasions, but now it is firmly locked away in some secret silver vaults. It is now far too valuable for the church to hold. 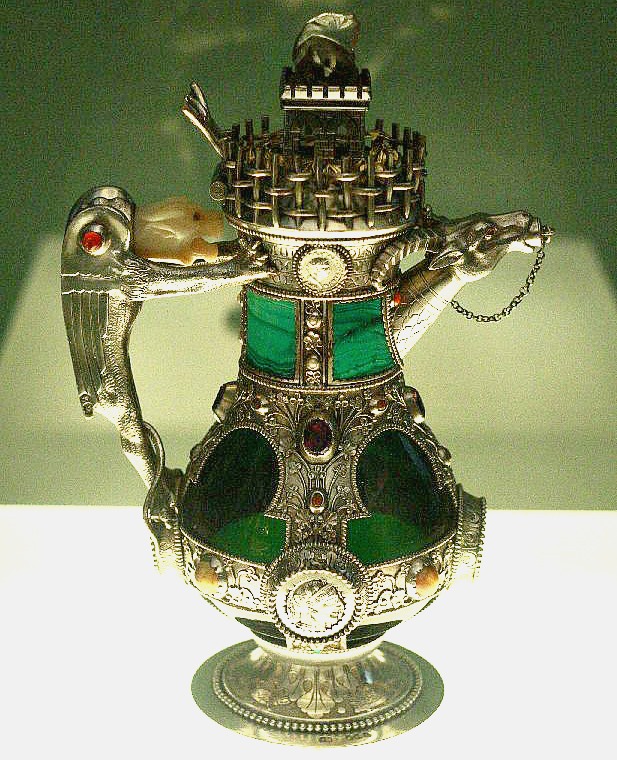 An example of William Burgess silver held by the V & A, London.
Posted by Rosemary at 10:11