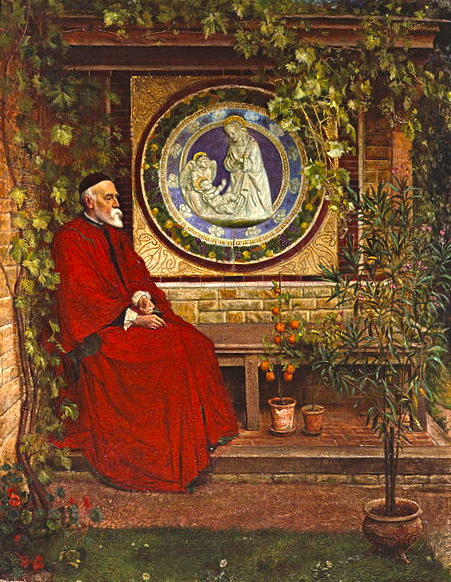 National Portrait Gallery, London via wikipedia
George Frederic Watts (1817-1904), portrayed as a Renaissance Florentine by Louis Reid Deuchars - for those who read my post on Tuscany, Italy have you noticed a roundel by Della Robbia in the background of the painting? 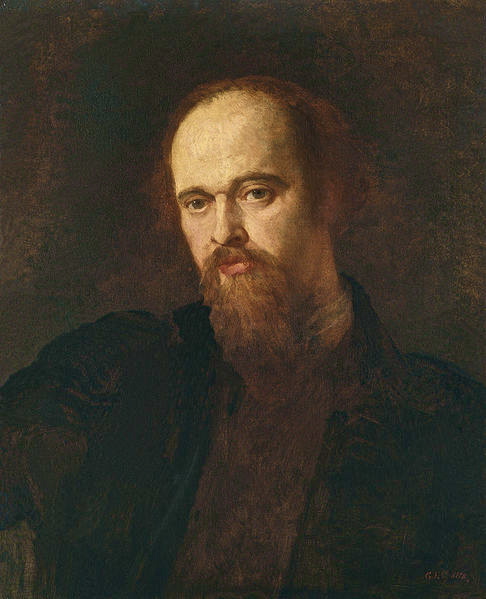 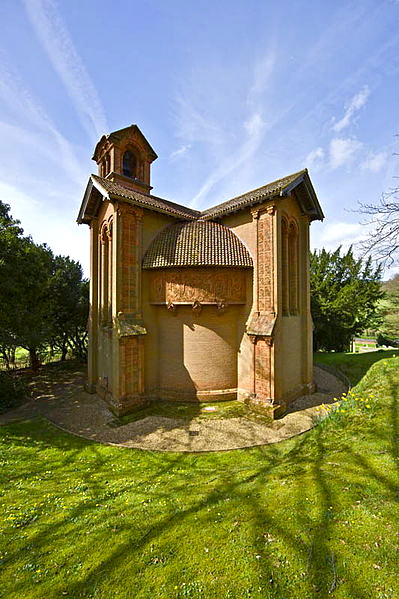 The Watts  Cemetery Chapel sits on the corner of a pretty Surrey country Lane in Compton, which leads on down to the Watts Gallery. The Gallery houses paintings and sculpture by George Frederick Watts the eminent Victorian artist, widely considered to be the greatest painter of his age.
We had visited both the Gallery and Chapel many, many, moons ago, and the Chapel in particular has lingered long in my memory.
When we were invited to lunch in Surrey yesterday, I suggested to J that perhaps we could leave our home earlier than necessary in order to renew our acquaintance with the Chapel - no time to do the Gallery as well. 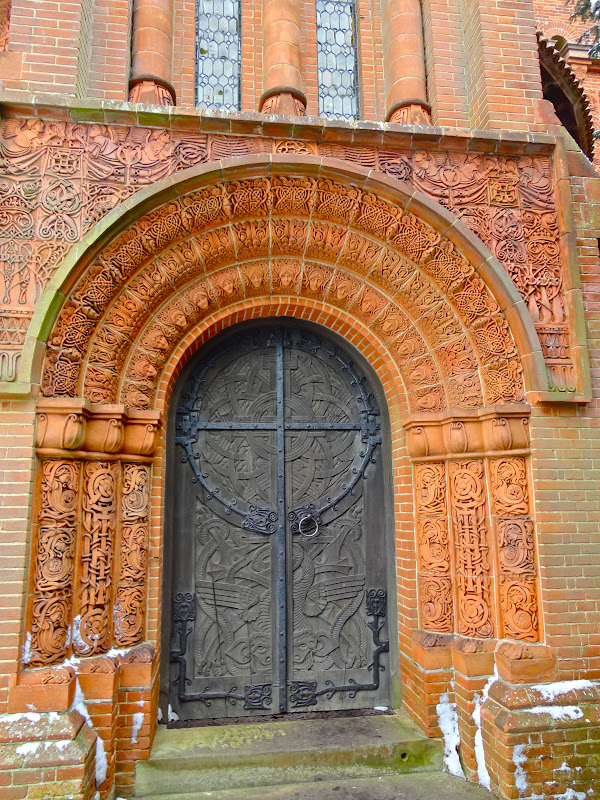 The Chapel was designed and built by Mary (1849-1938), wife of George, and is a unique fusion of Art Nouveau, Arts and Crafts, Celtic, and Romanesque influence with Mary's own original style. It is impossible not to admire the work and inspiration that lies behind this beautiful little building. It is built on a grassy mound and the deep red terracotta brickwork contrasts strikingly against the surrounding cemetery landscape. 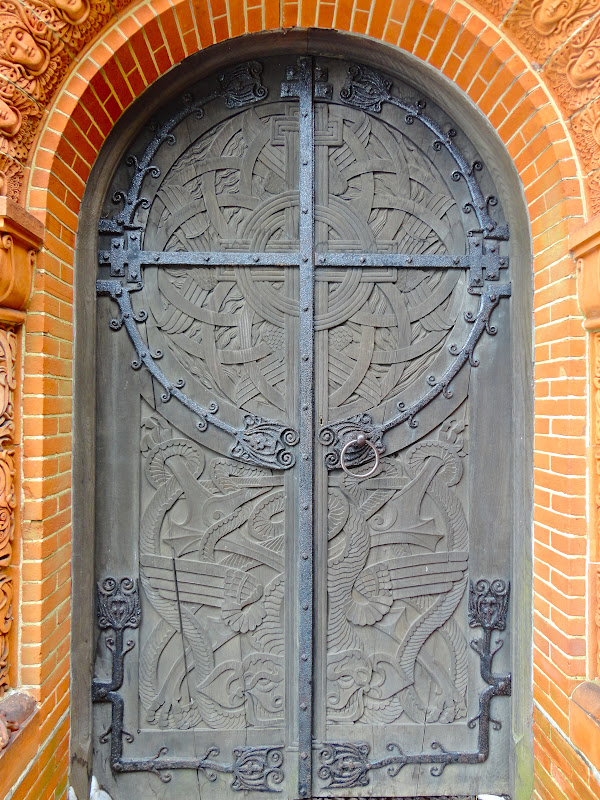 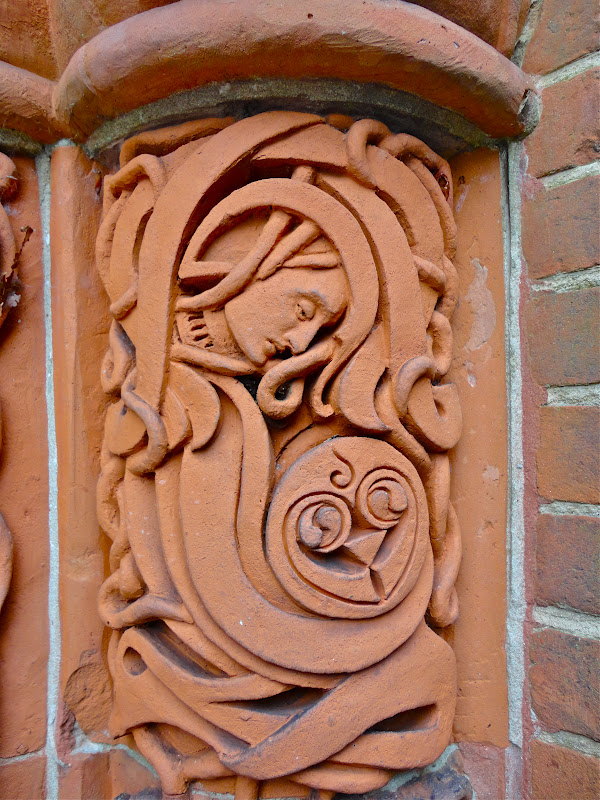 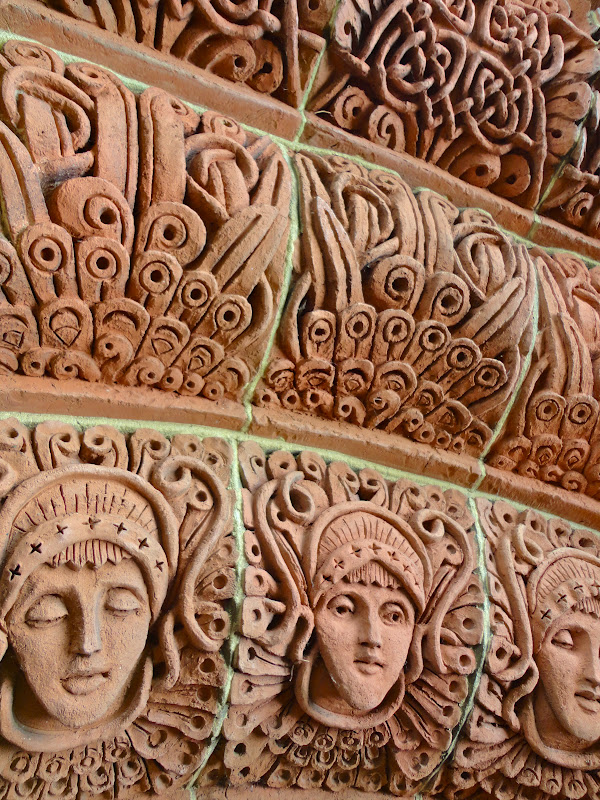 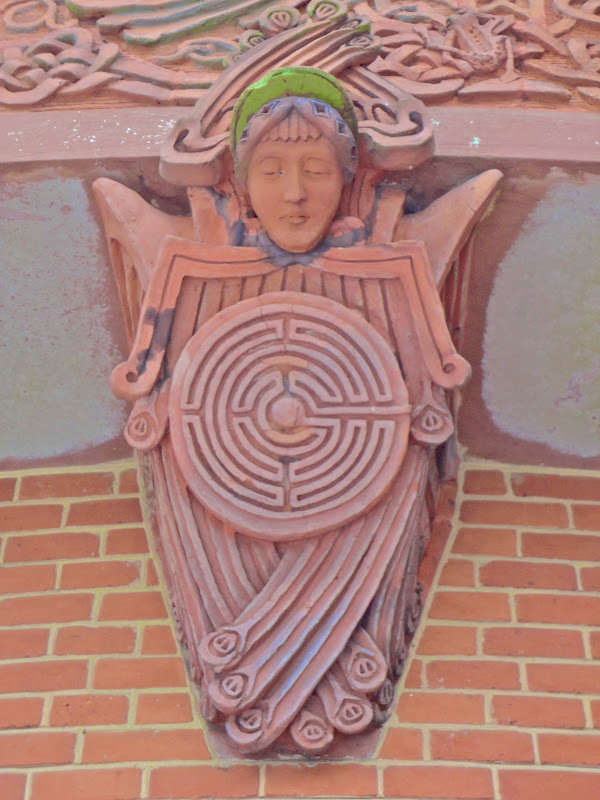 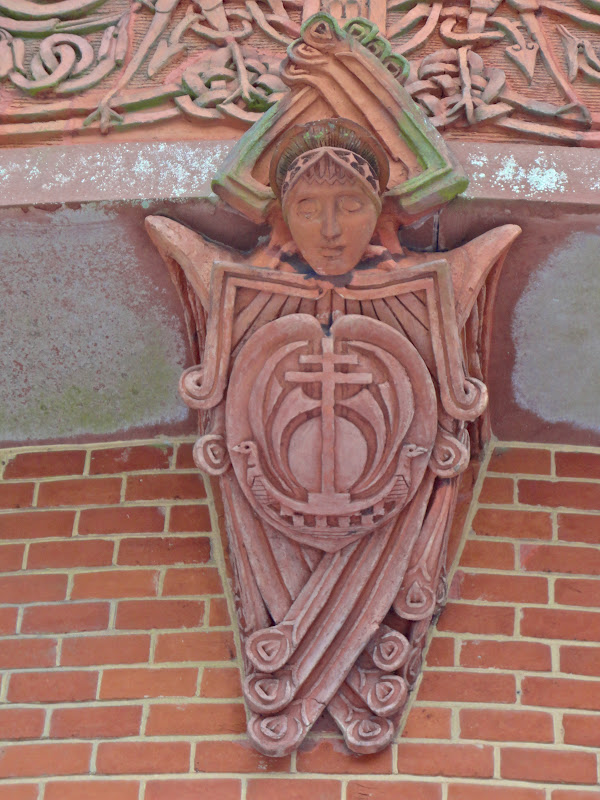 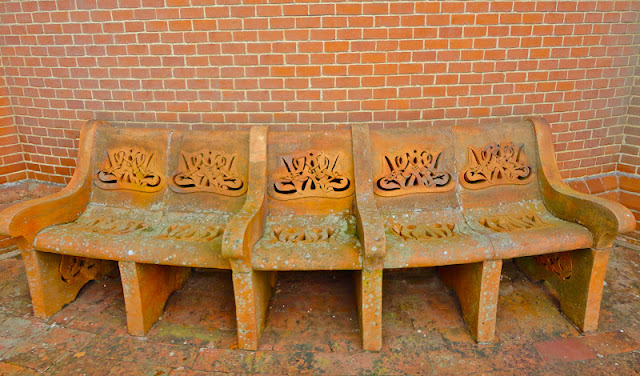 The interior is colourfully decorated in hand painted gesso designs, rich in symbolic representation. It illustrates the dome of heaven with cherubim and seraphim. Winged messengers of darkness and light which alternate to face the viewer and then turn their back. In front of each is a disc that represents in turn light and dark, day and night, decay to stability. The whole is linked together by the tree of life whose roots are at the base and whose branches intertwine the symbols above. 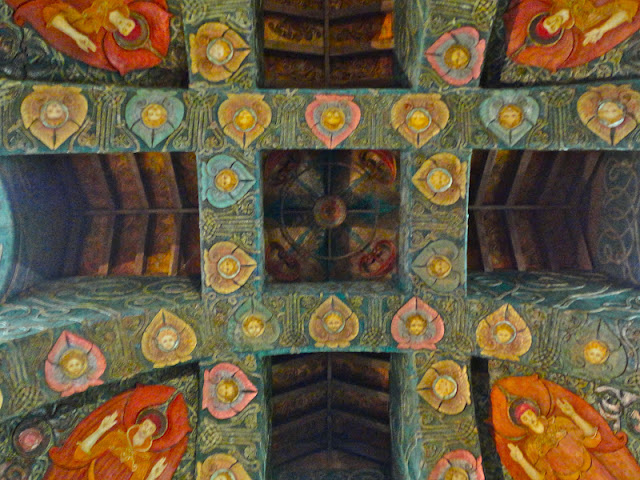 The eternal circle at the apex of the dome representing God. Radiating from this the angels closest to God are Cherubim, represented by babies' heads, each haloed by four wings in pink, blue, and gold, and seraphim in red. 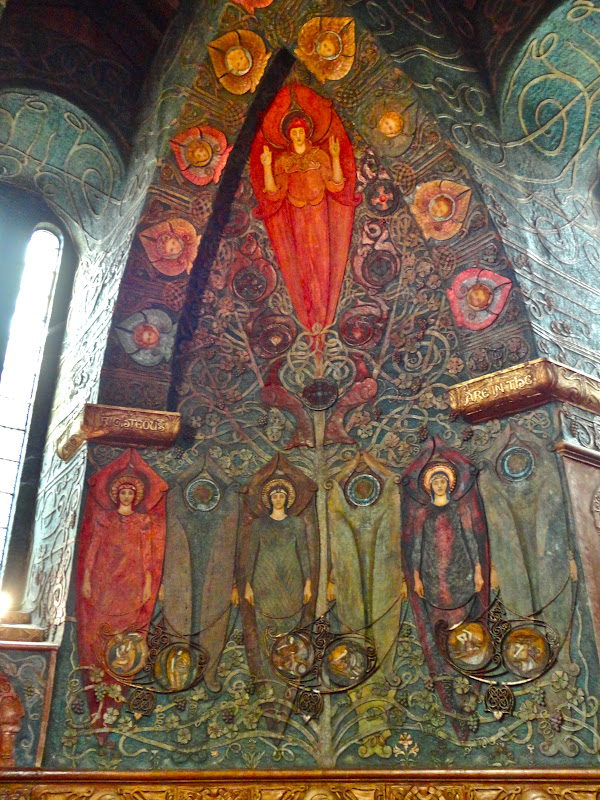 Seraphim in rich red blessing those below. Lower level winged messengers of darkness and light. 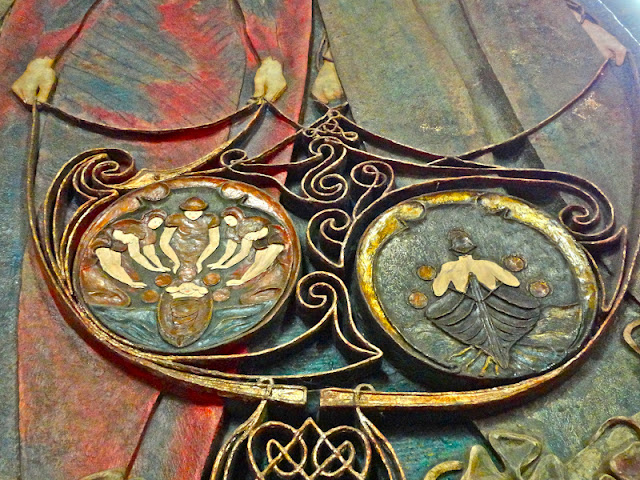 Two of the discs held by the messengers of darkness and light - light holds birth and dark holds death. 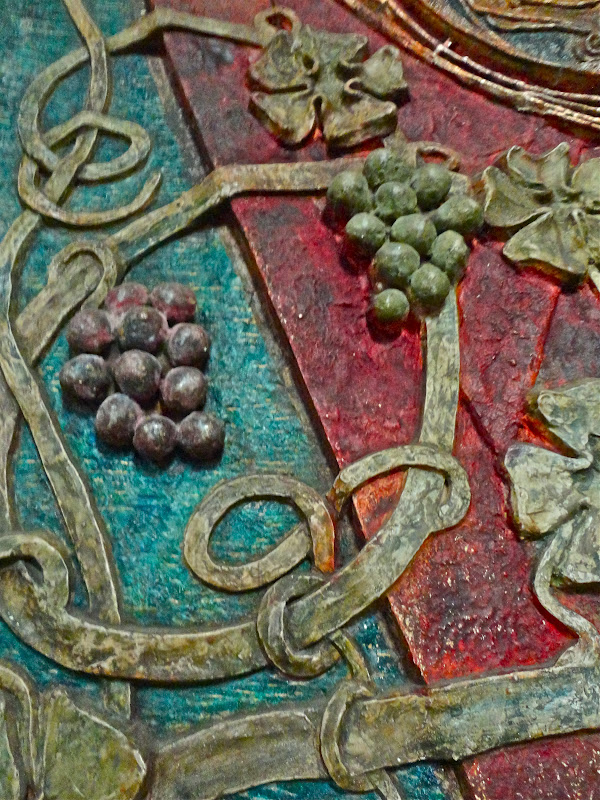 The tree of life is represented by a vine laden with grapes symbolic of “I am the true vine”. 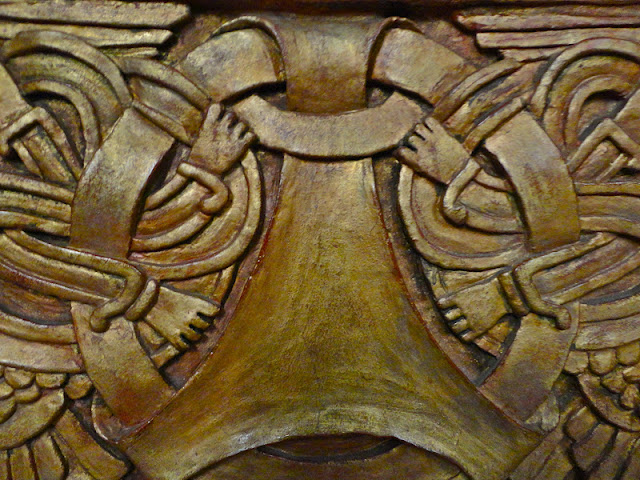 A golden terracotta girdle circles the interior with symbols representing the Holy Trinity.
Whilst closely managed by Mary Watts the decoration of the Chapel was a community affair, with more than 70 villagers taking part.
Many of the graves are also made of terracotta, and it is said that  Mary Watts was concerned by the ugly appearance of her Aunt's grave and from this developed the idea of producing gravestones in terracotta. 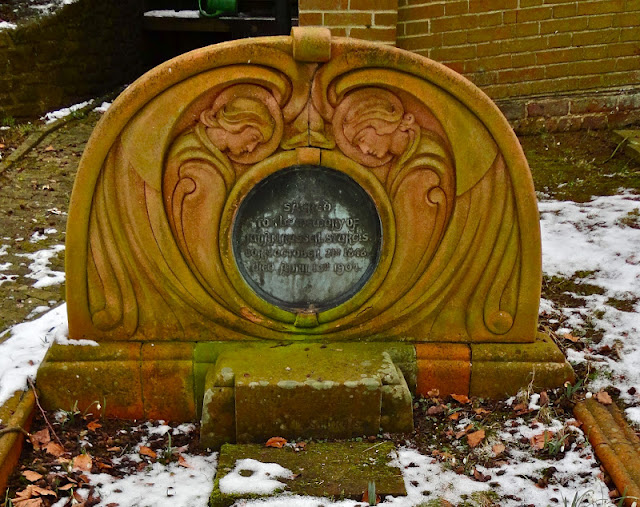 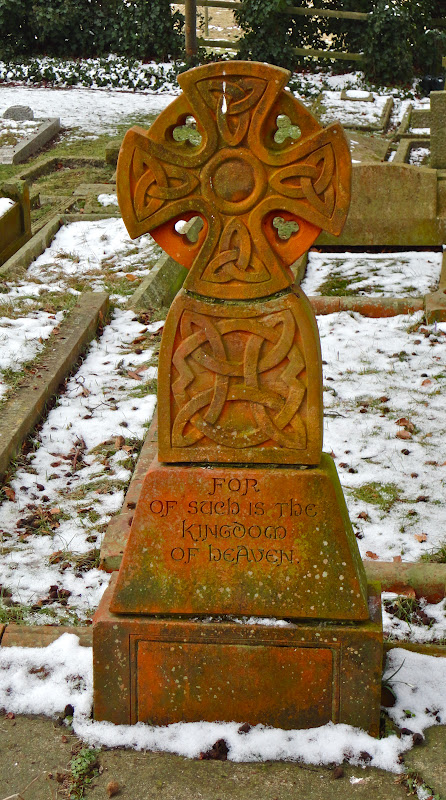 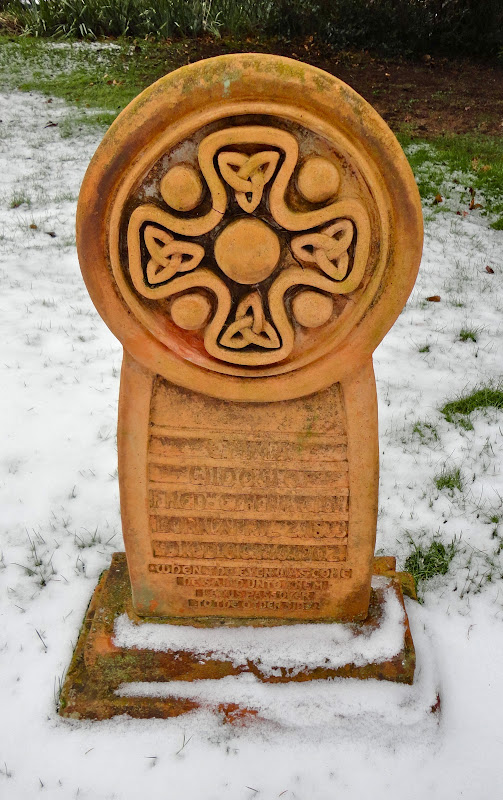 When her husband died, she placed his ashes in a gesso casket she had made two years earlier and set it on the central pedestal of the Chapel. Her own handmade terracotta candlesticks and a wreath of laurel, lilies and bay lay in front of the altar. 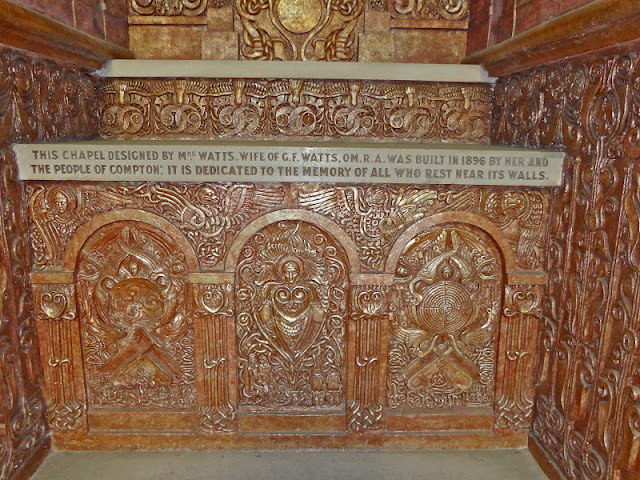