A Renaissance man from Walthamstow 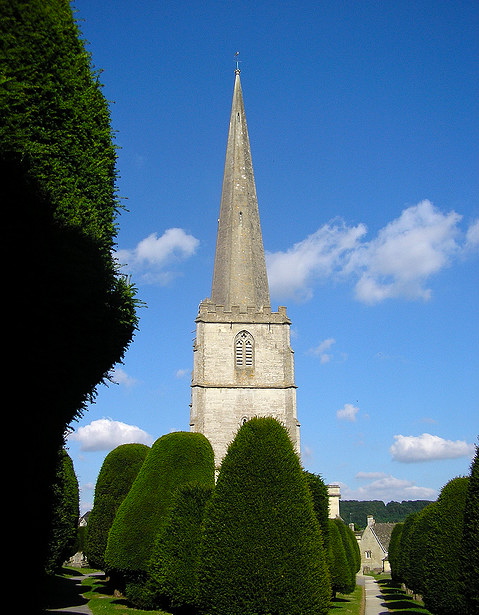 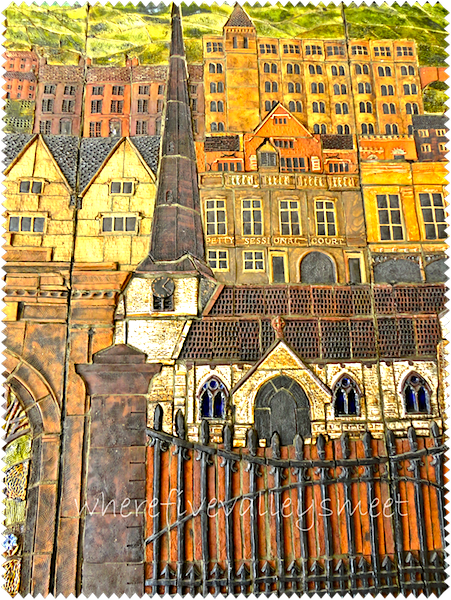 Plaque showing a typically tall Cotswold steeple - made by Philippa Threlfall & Kennedy Collings - Blackdog of Wells Fired terracotta
The Cotswold's are well known for their wonderful stone perpendicular wool churches, most having tall slender spires, which seem to soar forever high into the sky. In the Middle Ages men grew rich on the backs of sheep and with the proceeds they built themselves magnificent churches, they had plenty of cash and plenty of oolitic stone. Look across any valley, hill or meadow here, and it is likely that you will see a tall very slender spire.
However, on one hillside overlooking a valley, is a church which has a completely different pedigree. It does not replicate any style in the area and was built in 1861. 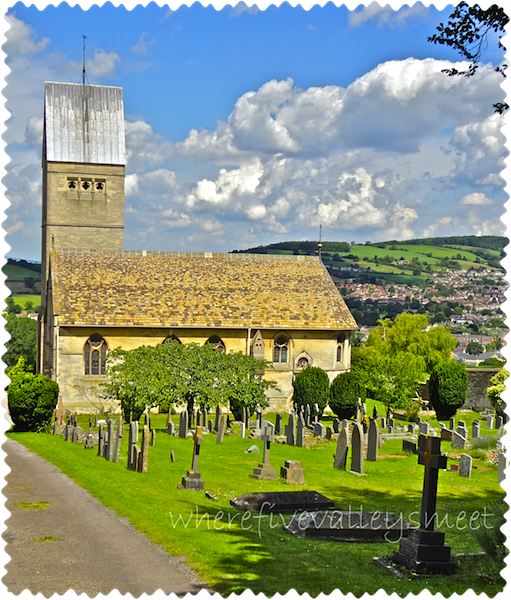 All Saints church was commission and paid for by Sir Samuel Marling, a local cloth manufacturer and former Liberal Member of Parliament. As well as being a successful businessman Marling was a noted philanthropist, and was also responsible for the setting up of several schools in the area. Marling was said to have demanded a design from Bodley modelled on a church at Marling in the Austrian Tyrol, but it appears Bodley has designed a fusion of both Austrian and French design. The resulting church could, however, sit quite happily in the Austrian mountains, or for that matter the French countryside.
The church has a distinctive saddle back tower with French Gothic gables. It is one of the most important early works of the architect G.F Bodley and of great significance in the development of high Victorian architecture. It was the first church to exhibit the work of the English Arts and Craft movement, and most important of all, inside are the very first stained glass windows commissioned from William Morris - our Walthamstow Renaissance man. Morris and Co. were formed in the year the church building commenced. A partnership between Morris, Burne-Jones, Ford Madox Brown, Dante Gabriel Rossetti and Philip Webb. Their capital was £20 each plus £100 from Morris's mother, and the windows in this church involved all of the partners. The outcome is an exquisite early Pre-Raphaelite gallery of their work.
The creation window above, is known to be the work of Philip Webb, but the roundel of Adam and Eve in the garden was the work of William Morris (to the left of the central Christ in Majesty roundel). 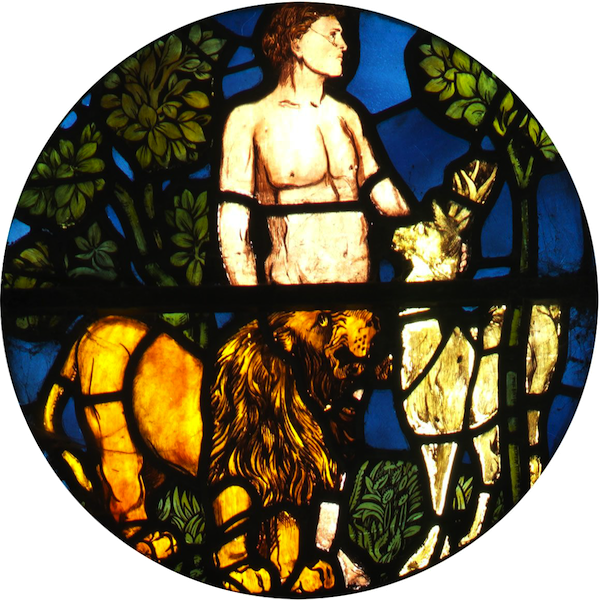 courtesy Eric Hardy
This window showing The Resurrection is attributed to Burne-Jones, but has echoes of Piero della Francesca's version of his frescoe in the Museo Civico, Sansepolcro, Italy. 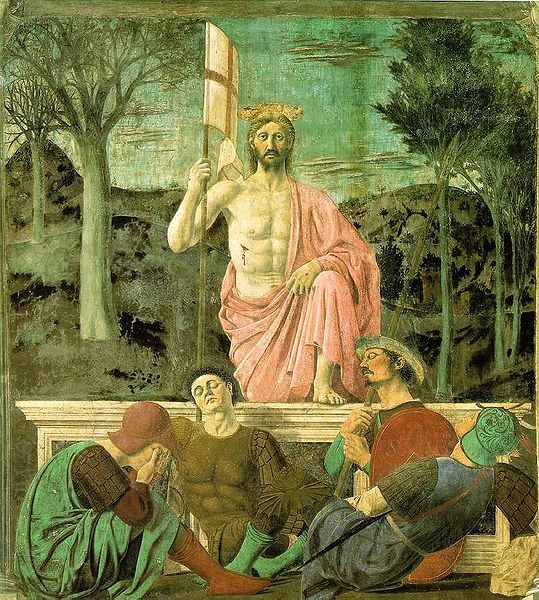 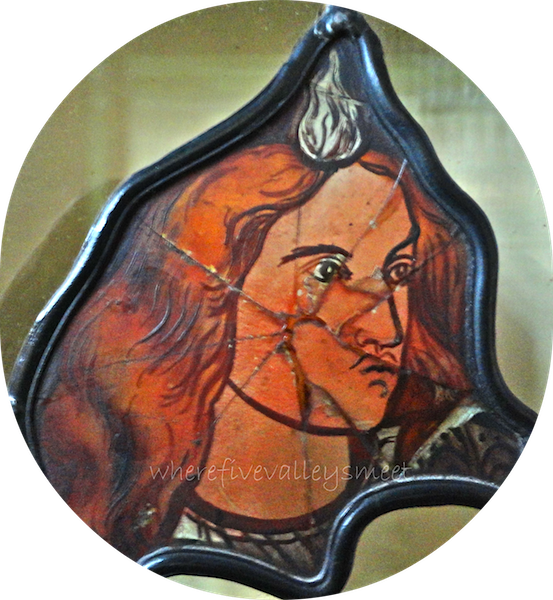 The damaged fragment of glass showing a remarkable likeness to Jane Morris. 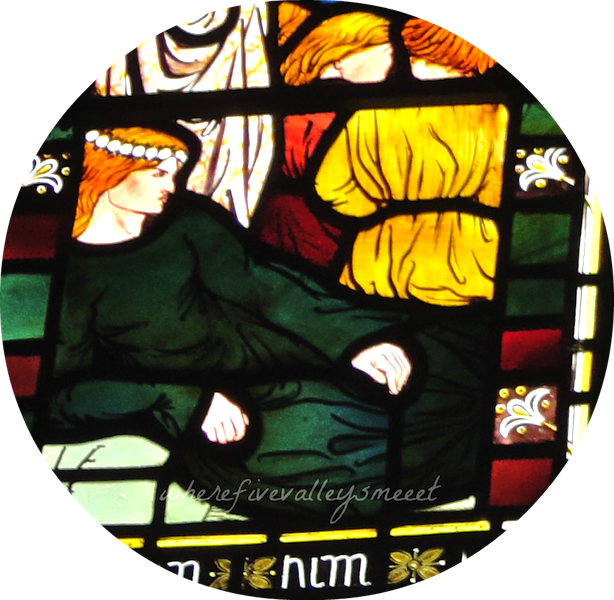 A detail from the window, St. Paul preaching at Athens, by William Morris, shows another image of, I believe, Jane Morris. 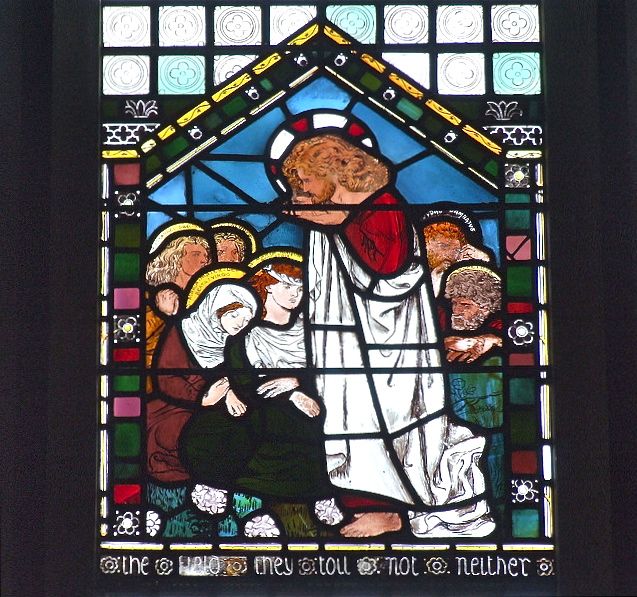 courtesy Eric Hardy
Detail from Sermon on the Mount by Dante Gabriel Rosetti. Christ in this window is George Meredith (novelist and poet) Blessed Virgin Mary is Christina Rossetti (Dante's sister) Mary Magdalene is Fanny Cornforth (one of Rossetti's favourite models). It is also suggested that the figure behind Christ is Judas Iscariot and shows a depiction of Gambart (a picture dealer much disliked).
The church also has some exquisite silver designed by William Burges and made by Charles Hart of London. Having been made by Burges it is particularly valuable and mostly locked away in the diocese vaults. 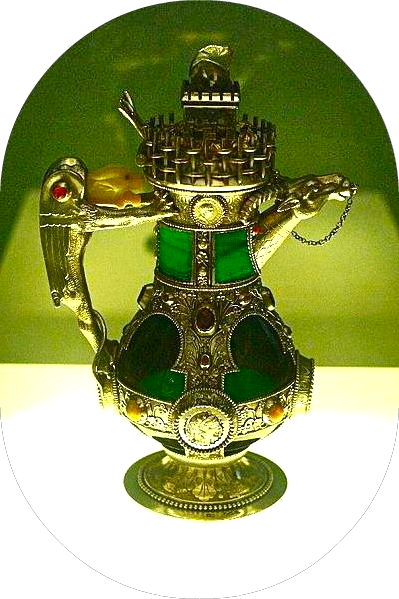 courtesy wikipedia
Decanter by Burges from the V & A Museum
William Burges demands a post of his own sometime in the future
Posted by Rosemary at 09:52